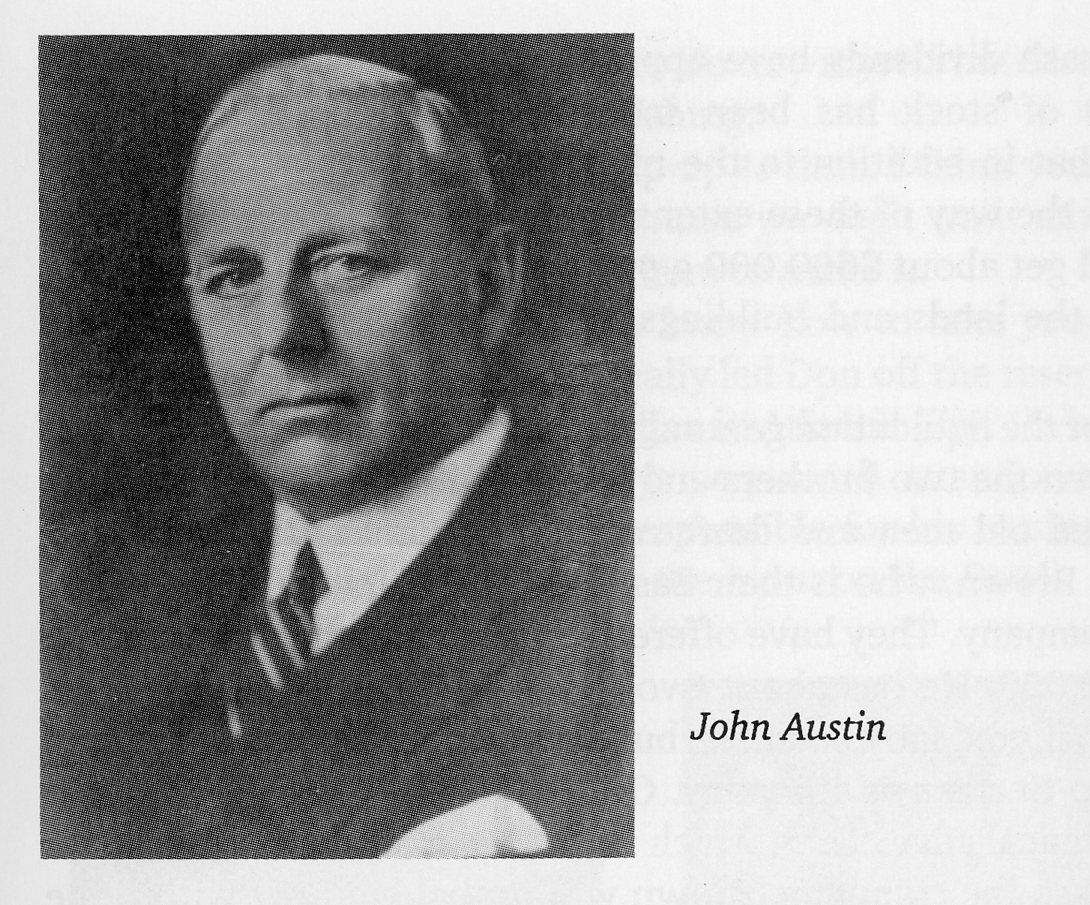 portrait: Photograph by callahan, submitted by organ cow. Taken on 1950-01-01

For an introduction to the Austin family and their company history, see: Austin Family Overview.

John T. Austin emigrated to the U.S. in 1889 and began his American career with the Farrand & Votey Organ Co. of Detroit, MI. It was while working with that firm that he developed his signature Universal Air Chest system for which he received a U.S. Patent. His employers declined to purchase the patent, instead Austin was able to make an agreement with another Detroit firm, Clough & Warren Company, a reed organ maker. The firm would start a new pipe organ division to be led by John Austin. The first Austin-patent organs were built in 1893, the same year that John-s brother, Basil Austin, came to the United States. Unfortunately, in 1898 while John was installing Opus 22 at Fourth Congregational Church in Hartford, Connecticut, the Clough & Warren factory was destroyed by fire, and was not to be rebuilt.

After the fire, John T. Austin and his brother Basil G. Austin incorporated the business as the Austin Organ Company. The Austins rented space in Boston to complete two contracts in New England, but during that year prominent businessmen of Hartford, Connecticut convinced John T. Austin to relocate there. He leased a space on Woodland Street in the recently built but never-occupied Watson H Bliss mills building in the spring of 1899. A few years later, the company was able to purchase the property. John T. Austin served as general manager of the firm, and became president in 1907.

Between 1915 and 1931 the Austin company produced 1200 pipe organs, approximately 75 instruments per year. However, 1929 brought the stock market crash and the Great Depression, and sales began to dwindle. By 1935, the officials of the company ceased organ production and began liquidating company assets, most of which were purchased by the newly established Austin Organs, Inc., operated by John Austin-s nephews, Frederic B. and Basil F. Austin. In 1937 Austin Organs, Inc. officially became successors to Austin Organ Company. The new company relocated to a smaller facility behind the huge complex that had served as the Austin Organ Company factory for 38 years. During World War II, the factory was contracted to produce coat hangers and glider wings for the war effort, but the glider wing contract was cancelled shortly thereafter. After the war, Austin Organs, Inc. experienced tremendous growth with the booming post war economy. John T. Austin lived long enough to see the beginning of new prosperity, he died September 17, 1948 in Hartford, Connecticut.

See Austin Organs, Inc. for further history of the company.

We received the most recent update for this note from Database Manager on April 29, 2019.

This builder has been viewed 2,873 times.