Exhibited in the 2013 OHS convention

From notes by E.A. Boadway, 1998: -- The recessed keydesk is finished in mahogany and rosewood veneers, and the speaking case pipes include six basses of the Great 4' Principal in the end flats, and some of the Open Diapason, which has eleven offset open wood basses inside the case. The original stop labels are all missing and are to be replaced.

Updated through online information from Scot Huntington.
The new 1976 natural-finish common-metal façade pipes replaced an older set of decorated zinc façade pipes,(likely provided in either 1875 or 1892), which had in turn replaced the original gilded common-metal façade built by Hook. The organ was presented in concert by Lois Regestein during the 2015 Vermont OHS convention.

Prior to the concert, the "temporary" typewritten stop labels were replaced with stylistic replicas of the originals, hand-engraved on bone. The detailed history of the instrument written by Stephen Pinel for the 2013 Organ Atlas reprinted the original contract, stating the purchase price for Warwick was $1,650 against which $350 was allowed for their old organ taken in trade. The contract further stated an additional unspecified stop was added for $50, perhaps the reed stop on the Great.

In 1875, E. & G.G. Hook & Hastings replaced the one octave of G-compass pedal pulldowns with a 2-octave C-compass pedalboard with new pipes and action with 16' Bourdon pipes, new Great to Pedal coupler, and the pipes, chest, and action for the two unenclosed Swell bass stops. The Atlas article further quoted the Northfield St. Mary's church records which stated the organ was purchased second-hand and "...put in thorough repair by Geo. S. Hutchings of Boston, of whom we bought it paying $550 & our old organ."

At the time of the Northfield installation in 1892, Harlan Seaver was the western Massachusetts representative for Hutchings, and installed the organ on their behalf, assisted by George Jeffords of Barre, Vermont. The organ was used the first time on Christmas morning, 1892.

Chronology from E.A. Boadway, 1998: --
ca. 1835
The organ was built by E. & G.G. Hook of Boston for a now-unknown church [Editor's note: See below for correction], and was altered later in the 19th century, by the addition of the two Swell Bass stops and a 16' Sub Bass of 25 notes. There were originally no Pedal pipes, and the Swell bass notes were probably permanently connected to the Great keys.

1892
Replacing an 1858 one-manual Nutting organ in the rear gallery, the Hook was moved to Northfield by Harlan P. Seaver of Springfield, Mass., in December, 1892. The installation cost just $550, plus $175 for the enlargement of the building. An 8' Trumpet or Cremona of Tenor G compass was replaced with an 8' Melodia of Tenor C compass, and the Swell 8' Viol and 8' Hautboy are of late 19th century pipes.

1976
A. David Hoore of North Pomfret, Vt., partially renovated the organ, and the work included altering the bellows, stripping the dark finish from the mahogany case veneer, replacing the once-gilded case pipes, adding two notes to the Pedal stop, installingÂ·a Swell to Pedal Coupler, and replacing the Melodia with a full compass Cremona.

1992
Watersmith Pipe Organs of Enfield, N.H., lowered the Pedal keys into a recess in the floor, making the organ much more comfortable to play.

Source not recorded: Open In New Tab Stoplist from 2013 OHS Convention research
We received the most recent update for this stoplist from Database Manager on April 09, 2020. 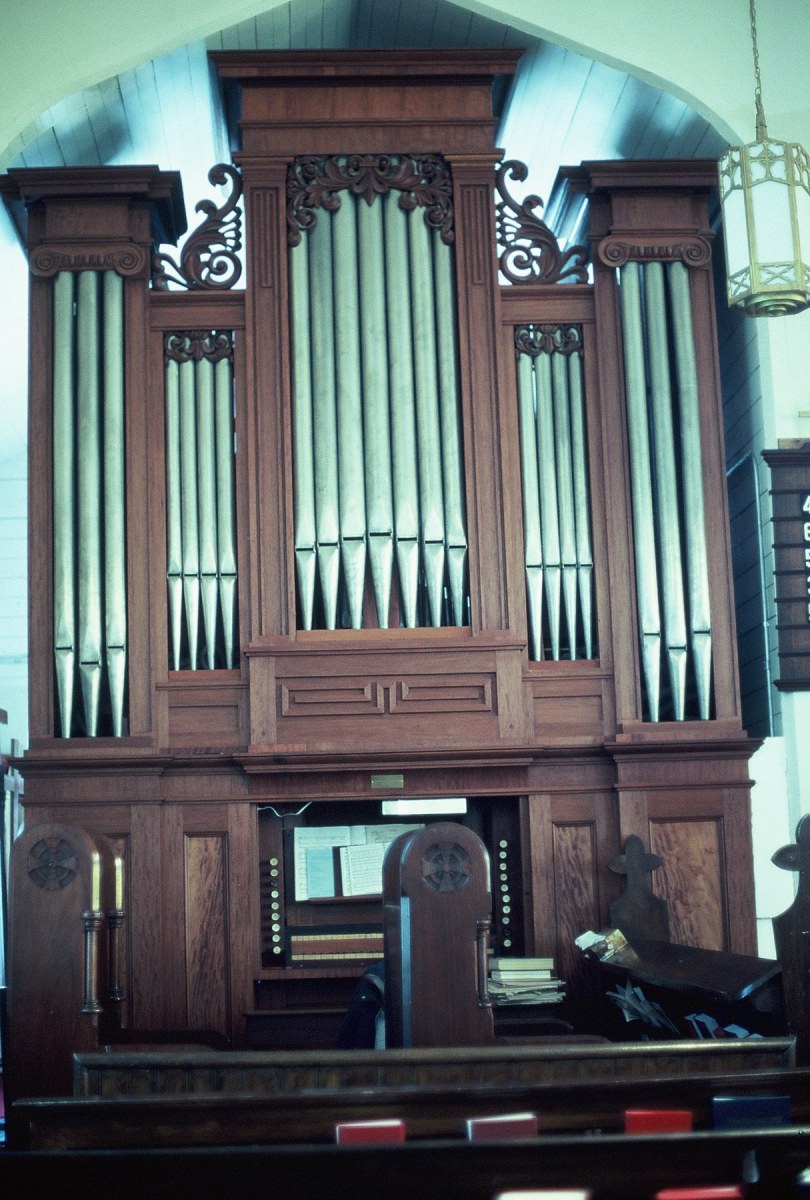 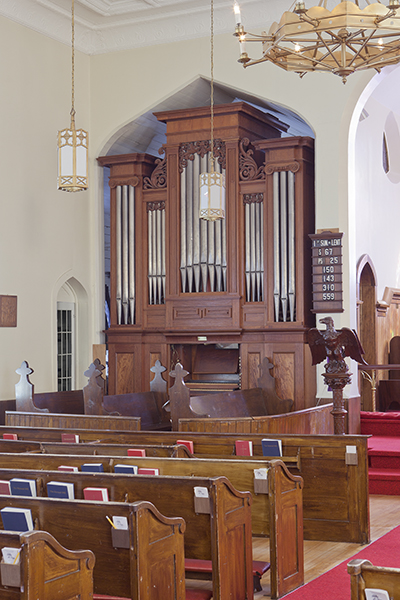 This instrument has been viewed 338 times.