We received the most recent update for this instrument's status from Stephen St. Denis on August 15, 2020.

Great: We received the most recent update for this division from Jim Stettner on August 17, 2020.

Swell: We received the most recent update for this division from Jim Stettner on August 17, 2020.

Pedal: We received the most recent update for this division from Jim Stettner on August 17, 2020.

Main: We received the most recent update for this console from Jim Stettner on August 17, 2020.

From an August 16, 2020 visit to the organ a transcription of a note on the music rack above the keyboards. The Shirley Meeting House Organ was built by George Stevens of Cambridge, Massachusetts. While not a style leader, the workmanship of his organs was exquisite, and they were constructed of fine materials. Several of his organs still survive in almost completely original state. This little organ, a gift of Mrs. Henrietta Whitney in 1847 is one of those. In 1962 Douglas Brown renovated the organ, carefully maintaining its original qualities. George Bozeman Jr. made further repairs and retuned the organ in an old English modified meantone temperament. This organ is especially important, and interesting, because it preserves these archaic peculiarities of English organs built during the first quarter of the 19th century. The keyboards of this organ have unusual compasses, the manuals lowest note is a GG, two and a half octaves below middle c’ and there is no low GG#, a typical omission of this period in American organs. The highest note is f3. The pedal keyboard also starts at GG, does not include GG#. And has only one octave of notes and pipes. Obviously, because of its short and unusual compass it is useless for normal pedal parts such as in a Bach fugue. Use it instead for pedal parts and at cadences. The stops on the left side belong to the Great Organ; the Swell Organ knobs and the couplers are on the right side. None of the stops have pitch numbers such as 8’, 4’, etc. This is because during this period the pitch of the stop was inherent in the name. The Diapasons Open and Stopped, Dulciana, and Hautboy are all unison stops. The Principal and the Flute are an octave higher (what we call 4’), and the Twelfth and Fifteenth should be self-explanatory (i.e. 2 2/3 and 2’).The pedal Sub base is a unison stop, the same pitch as the Open Diapason. Some of the stops are divided. The Swell pedal is a lever to the right of the Pedal board and has a notch to slide it into in order to keep the Swell shutters open. One must keep one’s foot on the pedal or leave the shutters closed. The shutters are weighted to close. This organ can still be pumped by hand, and you should experience this if possible. If you are fortunate enough to have someone willing to pump while you play you can easily imagine yourself living a century and a half ago. Since the organ is tuned in an old-English modified- tuning, instrumentalist may have difficulty tuning to it. Allow a trial before committing a soloist to a program. Playing this organ is a rare treat. We are very lucky that the good people of Shirley have so lovingly preserved it for us to enjoy. Lois Toeppner, M.M. 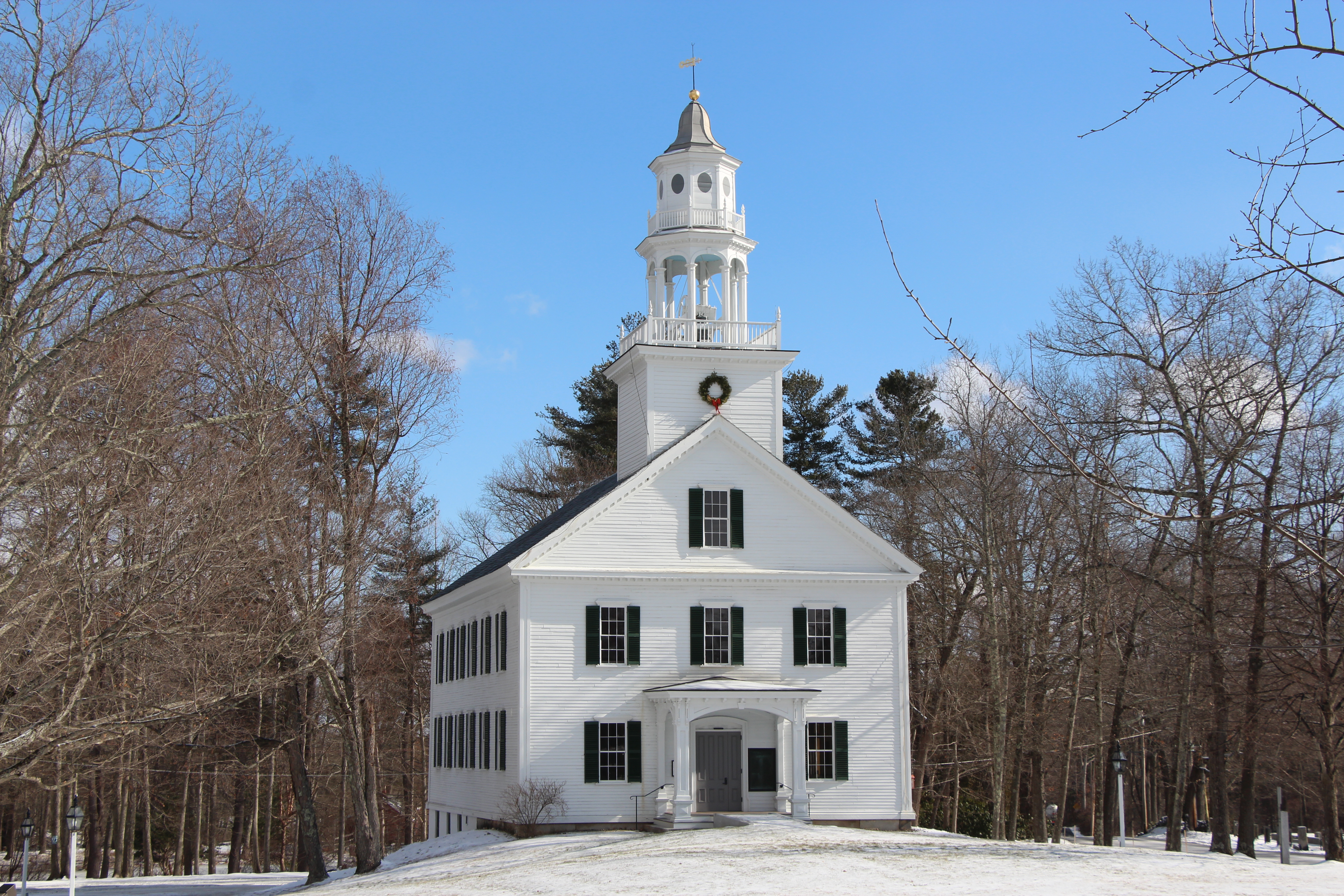 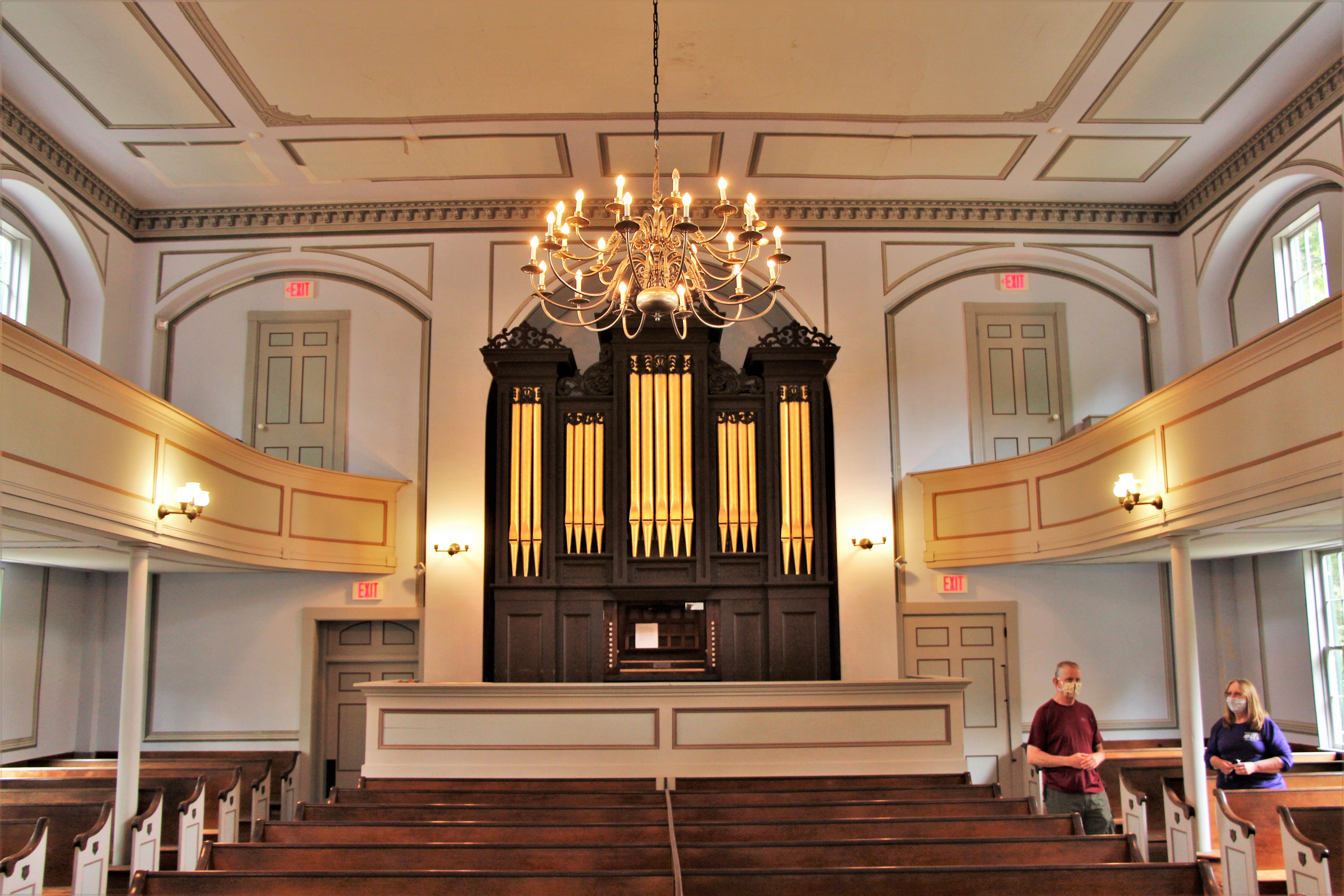 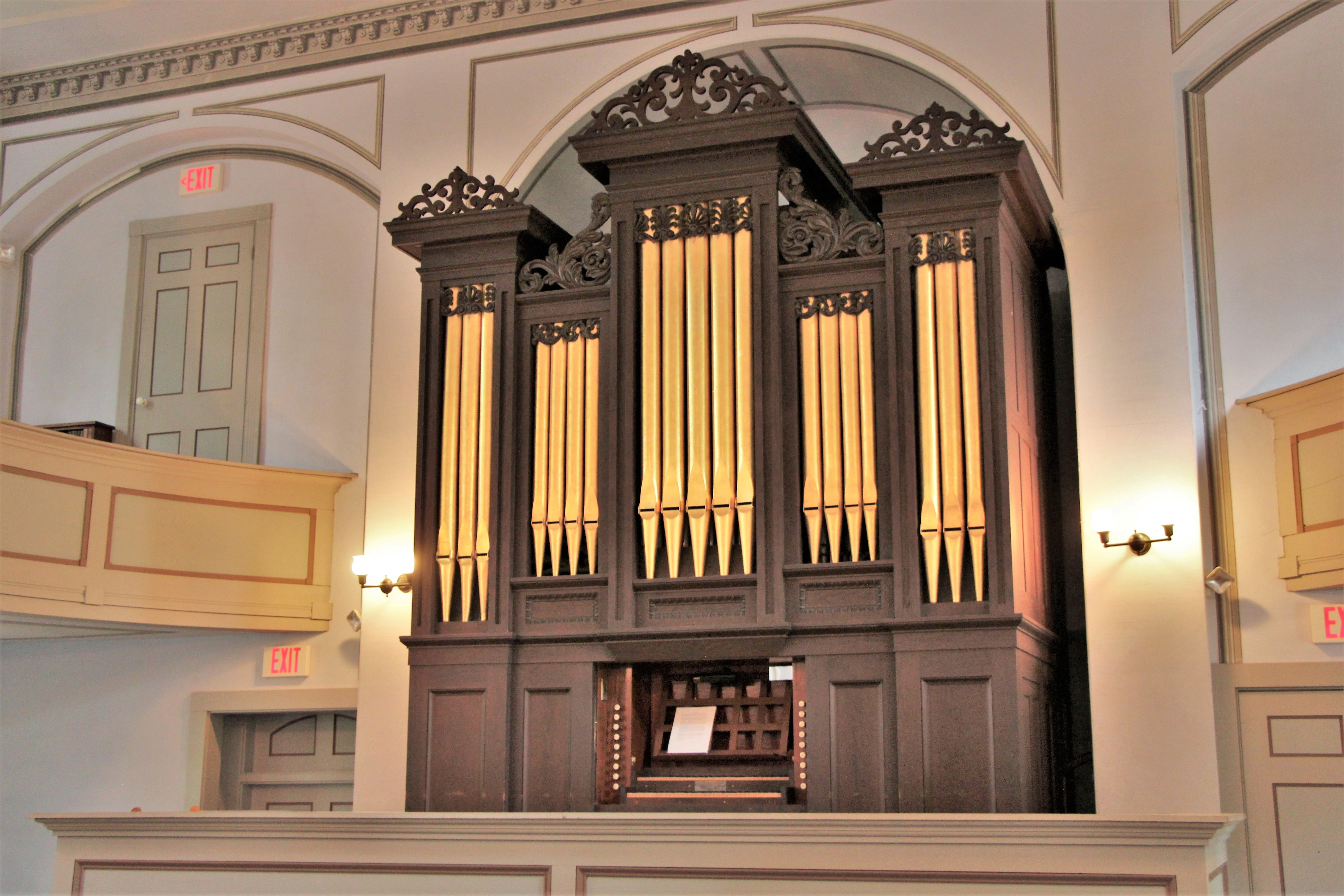 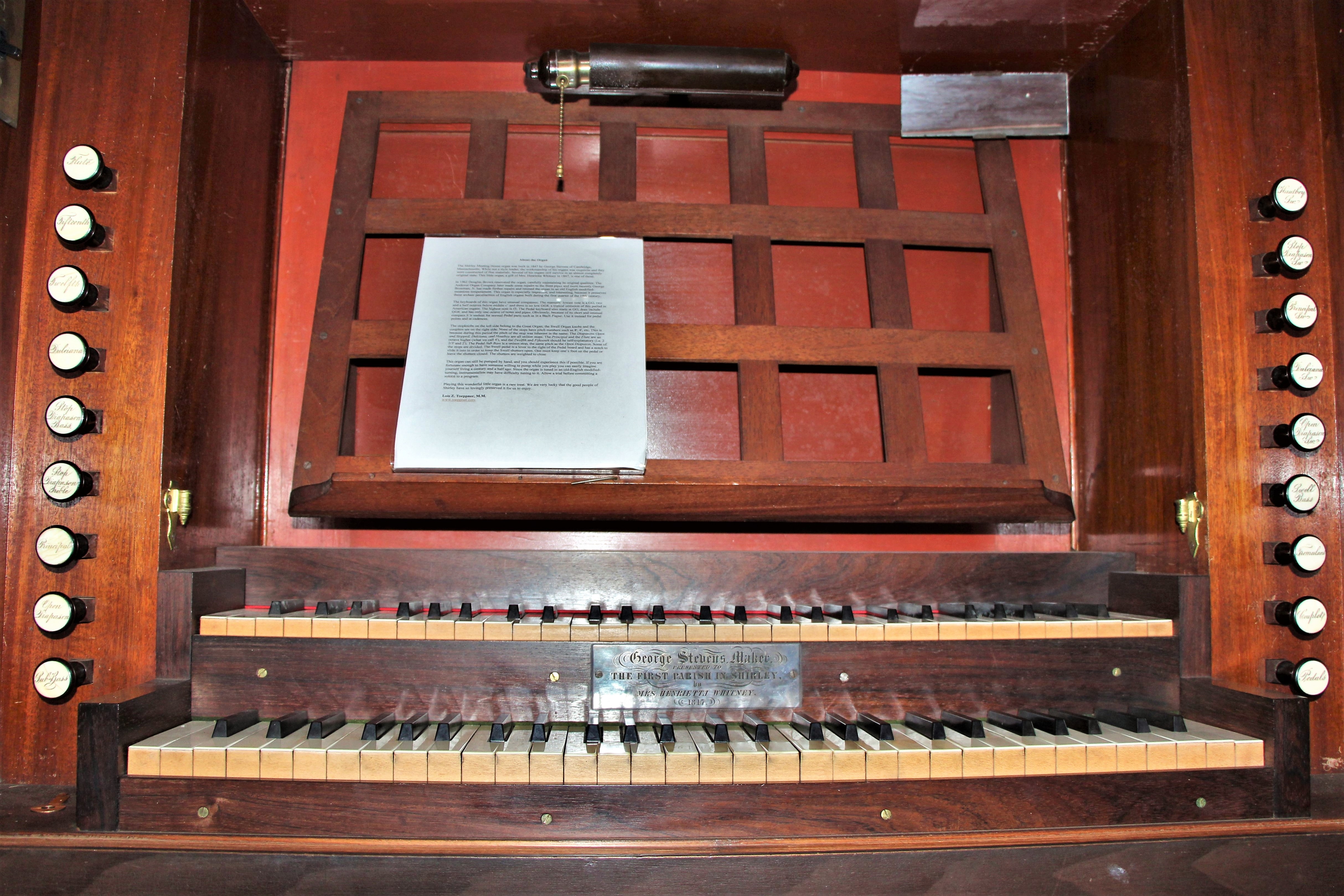 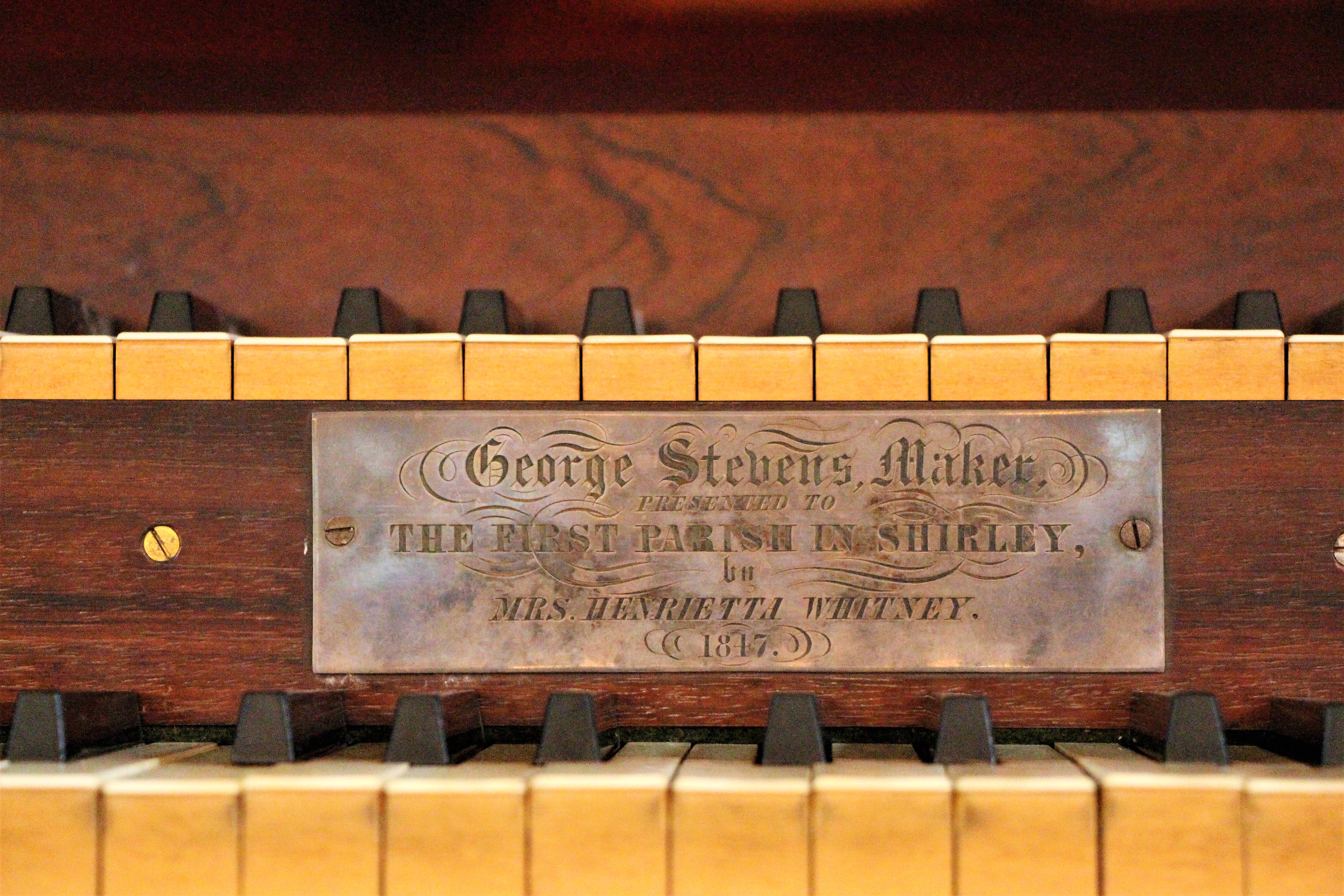 This instrument has been viewed 209 times.