We received the most recent update for this instrument's status from Paul R. Marchesano on February 02, 2022.

Updated through online information from Scot Huntington. -- The organ purchased in 1866 was the 1823 Hall in a previous altered state, with the ca. 1857 addition of one octave of permanently-coupled pedals, and a swell box enclosure. Installed in the rear gallery of Trinity Church, the organ remained essentially unaltered until a partial renovation in the early 1960s by Geddes of Winsted, CT, at which time a blower was installed and the feeder system removed.
The organ was "restored" ca. 1974 by Charles Aiken, and in hindsight, many regrettable and irreversible changes were made to the original fabric including the removal of the original sprung sliders and machine stop mechanisms, and replacement of the mahogany table with plywood.
Dana Hull was contracted n 1987 only to regild and restore the case finish. The long unknown builder of this instrument was identified by John Ogasapian as Thomas Hall based on specific and unusual case and carving characteristics, in a 1989 Tracker article.
In 1990, the organ received a new blower, feeder reconstruction, and new rackboards, amongst other refurbishments, by Quimby Pipe Organ Co. of Warrensburg, MO, during their construction of a new organ for St. Michael's Litchfield, the original home of the Milton organ.
By 2012 the organ had again become extremely unreliable and only marginally functional, and what was planned as a major renovation eventually developed into a complete restoration to its original 1823 state by S.L. Huntington & Co. of Stonington, CT. This work included the removal of the pedalboard, swell shutters and encasement, restoration of the casework to its original proportions, retabling of the windchest with new sliders and gibs based on the altered originals- all in mahogany, restoration of the two machine stops and sprung slider mechanisms, new rackboards, refinishing of the casework gilding, and restoration of the original voicing and pitch. Long underwinded by a 1974 blower that was undersized at this considerable altitude, a new, larger blower was installed. All removed components are labeled and stored with the organ in the church. Internal toeboard and machine stop evidence indicates the organ was originally designed to contain a treble Trumpet and divided Cornet/Sesquialtera. These were replaced with a Dulciana, Twelfth, and Flute (4) respectively, and internal evidence also indicates these changes were made prior to the original installation in Litchfield. The restored organ is tuned in a late 18th-century English well-tempered system as reconstructed by Charles Padgham. Pitch A438 @ 68 degrees, pressure 60 mm (2 3/8").

Updated through online information from Gregg Patruno. -- Still under restoration by Scot Huntington in January 2014, with re-installation postponed into 2014, according to The Day newspaper (New London, CT) on 1/5/2014. Article includes 5 workshop photos of the instrument, and an update on the restoration process.

Updated through online information from Gregg Patruno. -- Removed by Scot Huntington in January 2013 for "comprehensive restoration," with re-installation scheduled for Spring or Summer 2013, according to The Litchfield County Times newspaper on 2/1/2013. Article includes photograph of partially dismantled instrument, and an overview of its history.

Restoration of previously altered organ of 1823.

Source not recorded: Open In New Tab Extant instrument.
We received the most recent update for this stoplist from Database Manager on April 09, 2020. 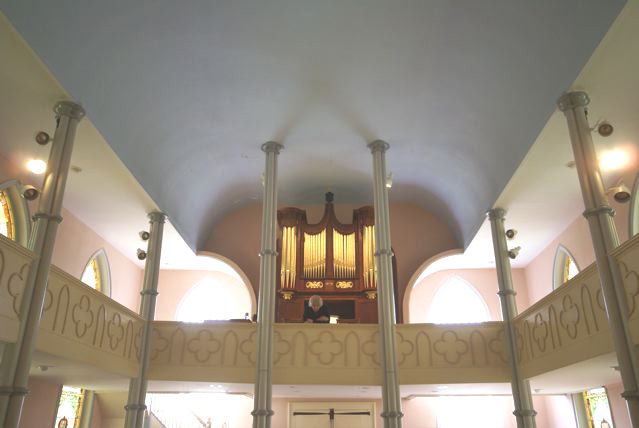 Pipe Organs in Connecticut sponsored by:

This instrument has been viewed 658 times.