Updated through online information from Fred Rueckert. -- With regard to the original instrument installed in 1907 only is the following: Builder Warren Church Organ Company, Memorandum of Agreement Warren Church Organ Company and Massey Estate (donors of instrument) dated November 1, 1906 per Mr. James Hay reads: action to be electric however tubular to be used where it can be done with advantage. A fixed 4 manual console is to be prepared, however the cables are to be made detachable so the console can be detached and stored during the winter. Mechanical action for swell pedals, choir organ to be enclosed in a box with double lourves, Great mixture and reeds will be placed in the choir box, chimes of 20 tubes, screwing and glueing all joints, spiral springs under heads of screws in areas where it is impossible to glue joints, an orgobolo to be erected, Communal windchests (patented 1904), AGO pedal board, swell box of extra thickness with double louvrse worked mechanically be direct connection from console pedals, provide chloride accumulators, switch board for charging batteries with rectifier, Case to be Architects design, woodwork to be quarter cut oak, front pipes to be gold leaf. It is understood that this contract both Charles S. Warren and Frank S. Warren are to held individually and collectively responsible for the performance of the contract.
ADDITION to contract dated December 18th 1906 says, additions to the Chautauqua Instrument have been made by Dr. Andrews of the Oberlin College. Compass of the swell chest to be extended to 65 notes from 61, Each stop in the swell department except flautina, mixture and Vox Humana is to have 4 notes added to its compass, swell box to be enlarged to make this happen, 1 rank of 61 pipes to be added to the swell Vox Celeste, one rank tuned sharp and one flat of the normal pitch. The Vox Humana to be placed on a superimposed chest having its own box and tremole. 32' Open Diapason added to pedal placed horizontally. An octave coupler to be added to the pedal department, adding One Octave to: 32 ft. 16 ft. 16 ft. Violone, 16ft. Dulciana, 16ft. Bourdon, 8ft. Bass Flute, 8ft. Violincello, 16ft. Tuba, 16ft. Trombone and 16ft. Trumpet. The Massey estate approved the changes ($3,000). The Warren Church Organ company will maintain the instrument for the 1907 and 1908 season. there is a 5 year warranty from installation. 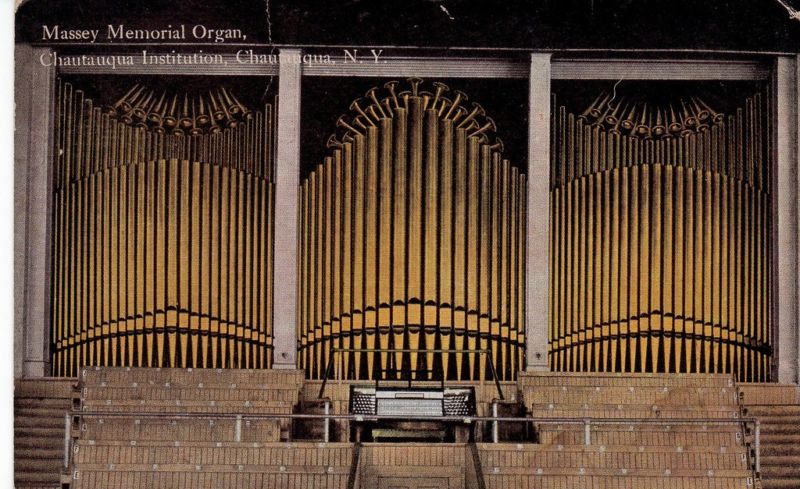 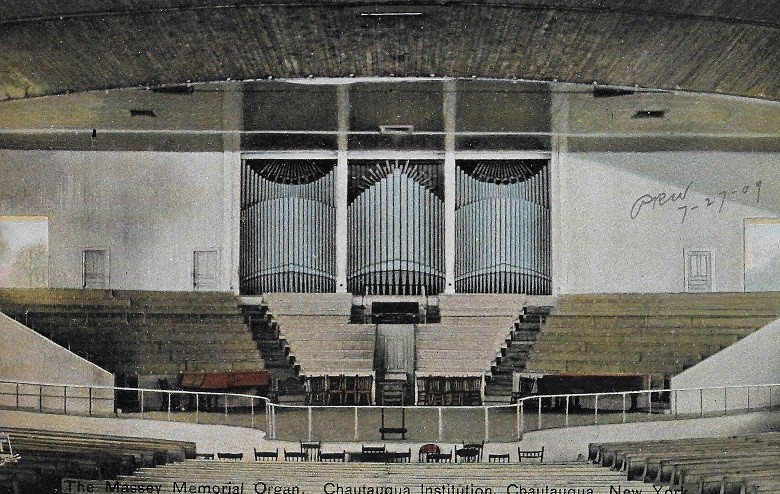 This instrument has been viewed 1,780 times.