Great, Swell, Choir, Echo and Pedal: We received the most recent update for this division from Jeff Scofield on November 13, 2020.

Main: We received the most recent update for this console from Jeff Scofield on November 13, 2020.

From the NYC AGO NYC Organ Project: Following the March 1917 fire that destroyed the Baptist Temple and its Odell organ, the church contracted with J.W. Steere & Son of Springfield, Mass., to build a new organ at a cost of $17,000 for the rebuilt church. The Steere organ is installed in two chambers in the front corners of the auditorium, while the Echo division is located in a large room in a rear corner of the church. The Baptist Temple organ is one of only two four-manual instruments by Steere still in its original condition. In the years following World War II, downtown Brooklyn began to decline, the congregation dwindled, and the organ fell into disrepair. Ongoing restorative repairs were begun in 1987 by organ curator Keith Bigger, who is a member of the Organ Historical Society (OHS), with assistance from organbuilders Allen Dreyfuss, John Klauder, and Larry Trupiano of Mann & Trupiano.

On September 18, 1993, following a recital by Michael Kaminski, the Organ Historical Society awarded its distinguished Historical Citation No. 137 in recognition of the J. W. Steere & Son Organ as an outstanding example of organbuilding and worthy of preservation.

In recent years, the organ has not been used in services; however, it has been featured in the accompaniment of silent films in programs produced by the Brooklyn Chapter of the American Guild of Organists. Sadly, this historic Steere organ was partially destroyed by fire on July 7, 2010.

Updated through on-line information from Neil Carlson. -- From Keith Bigger by way of friends: The swell division was destroyed in the 7/8/2010 fire; about half of the pedal division destroyed. Eventual fate of the organ unknown at this time. The church had stopped using the organ for services. Only recent use was for special events, such as silent movies.

Posted to OHS Members List by Keith Bigger July 8, 2010: -- "The fire broke out in the Swell Division and did not spread, but I have to believe the 14 Ranks are now lost. No cause as yet. Much water and smoke damage. Insurance people are drying things out." and July 9, 2010: -- "There was no water damage to either the Echo Chamber or the Choir/Great/Pedal Chambers and Console. The Blowing Plant is adjacent to the Swell through 2 wooden doors. Let's hope the fire didn't spread to it. I had many left over Steere pipe work left over stored there, along with a Steere Tremolo. I have contacted the insurance company and gave them the name of a local organ builder who I have designated as Organ Conservator. He is well known to us all, and is fully capable of replicating authentically the destroyed section. Lets hope the insurance money holds out."

Updated through on-line information from Keith Bigger. -- The Echo division is installed in a tower and speaks through an ornamental plaster grill into the rear gallery. None of the other organs (listed above) were in original condition. The missing 2' Flautino pipes (notes 8 thru 48), were made up from Great 8' Hohlflute pipes of the Wheeling organ.

Some Sw. pipework removed in 1970's for repair and never returned.

Keith Bigger via the NYC AGO NYC Organ Project: Open In New Tab
We received the most recent update for this stoplist from Jeff Scofield on November 13, 2020. 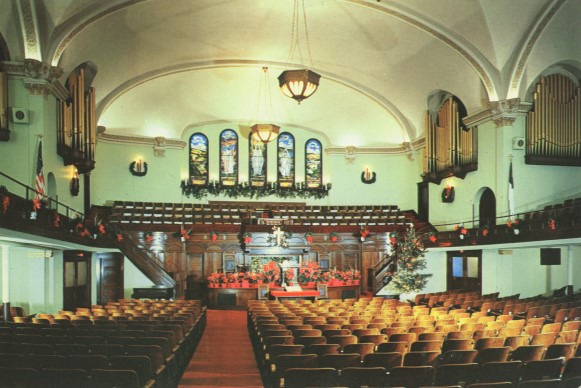 Church interior: Photograph by Postcard courtesy of Keith Bigger via the NYC AGO NYC Organ Project, submitted by Jeff Scofield. 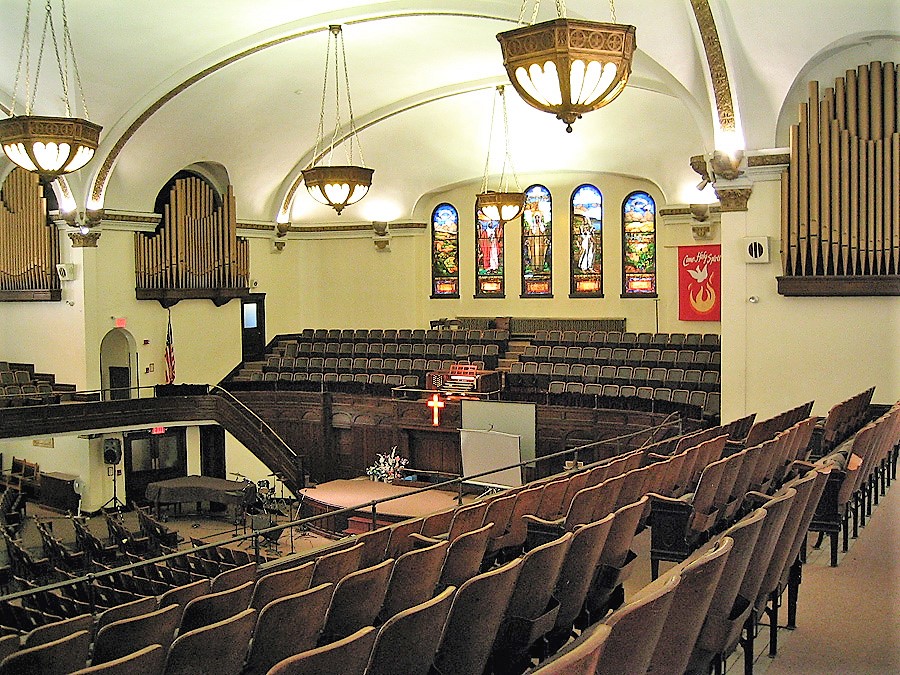 Chancel, choirloft, chambers and console: Photograph by Steven E. Lawson via the NYC AGO Organ Project, submitted by Jeff Scofield. Taken on 2006-11-18 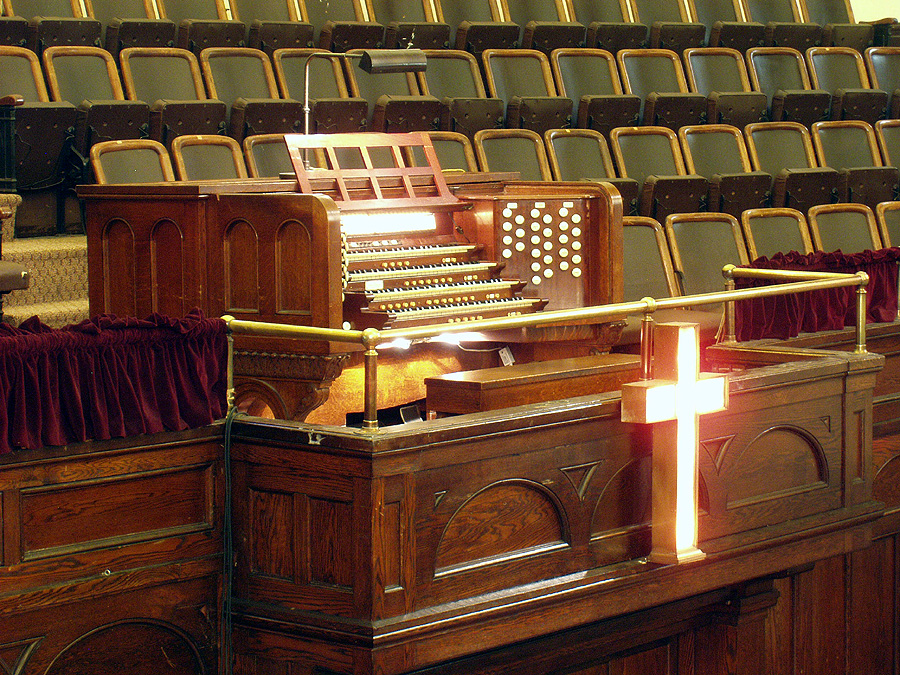 Console: Photograph by Steven E. Lawson via the NYC AGO Organ Project, submitted by Jeff Scofield. Taken on 2006-11-18 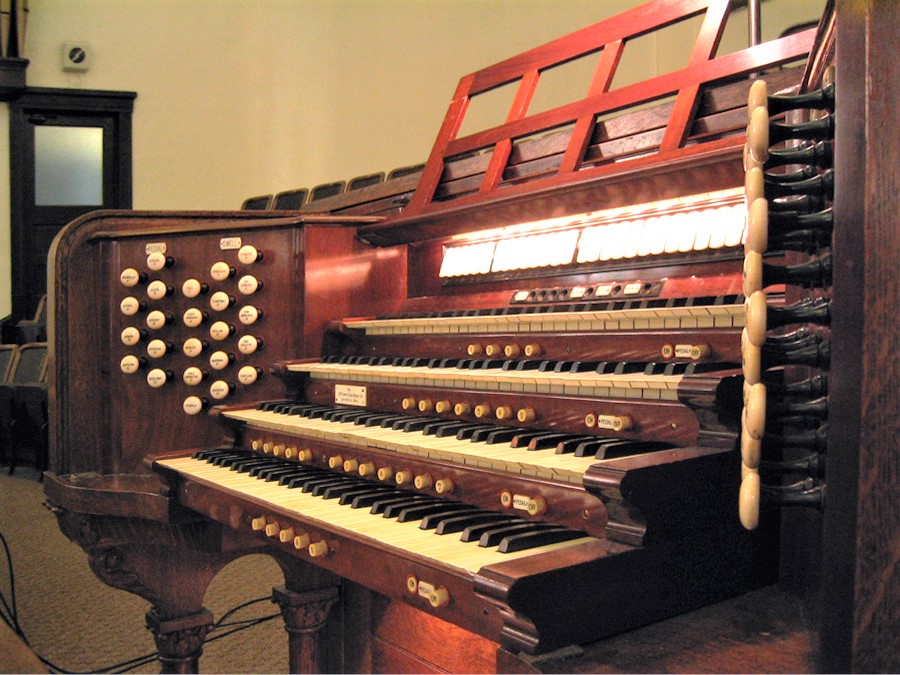 Console : Photograph by Steven E. Lawson via the NYC AGO Organ Project, submitted by Jeff Scofield. Taken on 2006-11-18 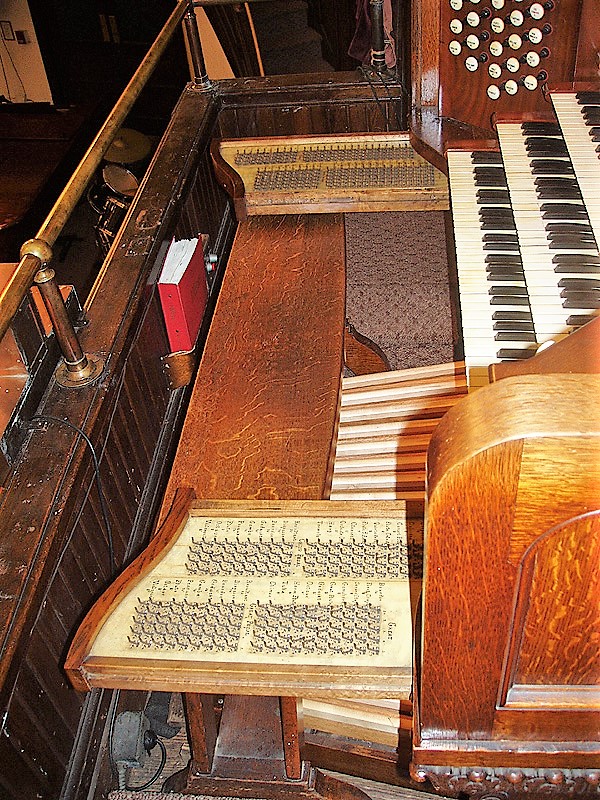 Cosnole and setter board: Photograph by Steven E. Lawson via the NYC AGO Organ Project, submitted by Jeff Scofield. Taken on 2006-11-18 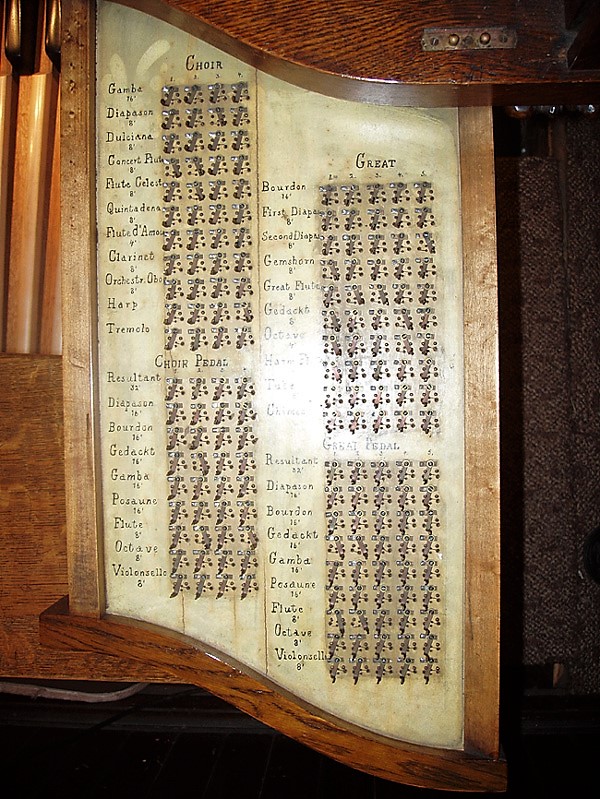 Setter board: Photograph by Steven E. Lawson via the NYC AGO Organ Project, submitted by Jeff Scofield. Taken on 2006-11-18 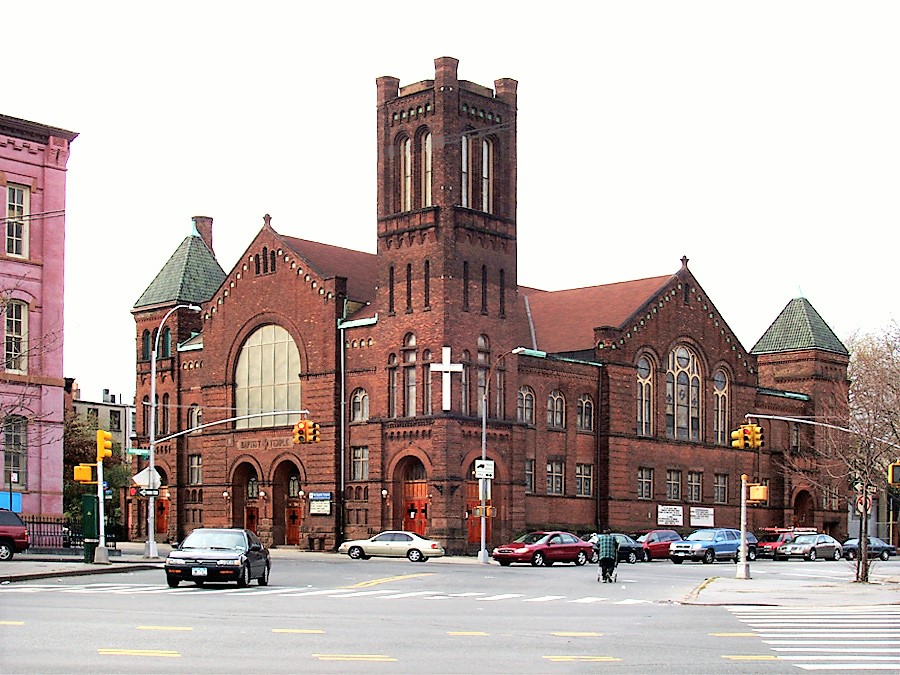 Church exterior: Photograph by Steven E. Lawson via the NYC AGO Organ Project, submitted by Jeff Scofield. Taken on 2006-11-18

This instrument has been viewed 806 times.