Updated through online information from Scot Huntington.
The pedal division, pedalboard, and all mechanical accessories associated with it were removed during the restoration, and are believed to be still stored on museum property.

Updated through online information from Scot Huntington.
The organ was an original installation in the rear gallery of Grace Episcopal Church, Cherry Valley, New York. An inscription inside the organ "Gilbertsville" is now believed to indicate a collaboration with Elsworth Phelps on the construction of this instrument--the first from-scratch instrument by Giles Beach as an independent builder. Phelps was the area's first established organbuilder, working ca. 1816-ca. 1855, working chiefly in Guilford, New York, but also in surrounding communities including nearby Gilbertsville, dependent on the source of his outside investor support at any given time.
An unanswered question to date, is whether Beach may have apprenticed with Phelps. A single-octave Pedal clavier with 13 Bourdon 16' pipes and Manual to Pedal coupler was added at some point in the 19th century, by Giles Beach. After being superseded in Cherry Valley by Hook & Hastings (No. 1997, 1903), the Beach sat in the gallery abandoned and unplayable. When the 1819 Cornwallville, New York Methodist Church was acquired by the Farmer's Museum in 1964 to add to their recreated community, the Beach from Cherry Valley was acquired by the museum for installation in the relocated and restored church.
Restored by Sidney Chase of Worcester, New York in 1964, the organ was returned to largely original condition, with the addition of a modern electric blower, extension of the casework to the rear wall to protect the works from visitor intrusion, and a set of Odell pipes was installed to replace the pipework of the missing Fifteenth (2').
In 2003, a museum curator of short-lived tenure mandated the unfortunate alteration of the unusual natural-color butternut casework by staining it dark brown, irreversibly destroying the original finish and patina of the historic woodwork.
The stoplist below is slightly incorrect. The one presumed original ivory label is spelled as follows: Std. Dia Bafs; and controls the only set of wood pipes in the organ. The treble foundation stops all begin at tenor-f, and all pipework except the 8-foot bass are common metal. The pitch was recorded in 2005 as A442 at 65 degrees and the pressure is 50mm. The reservoir is double rise, and the feeders are intact. The pine windchest is chromatic, and the facade pipes are half-round wooden dummies. The metal pipes were trimmed for the installation of slide tuners in 1964.

Source not recorded: Open In New Tab Taken from Organ Atlas 2006
We received the most recent update for this stoplist from Database Manager on April 09, 2020. 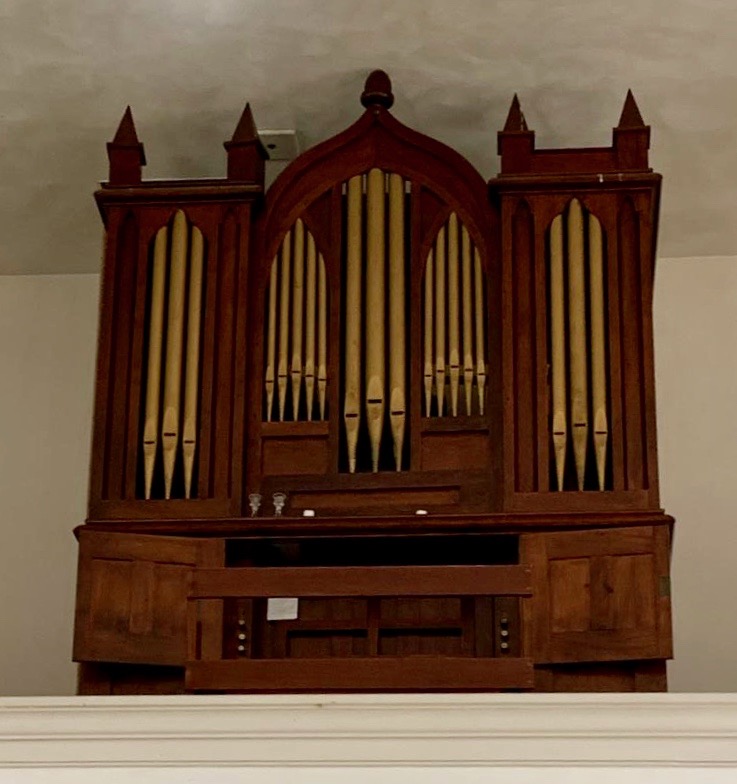 This instrument has been viewed 675 times.