This organ was last used in April 2017. The congregation relocated to a new building and the instrument was not moved. It is believed to still be there in 2020 as the old building is used by the community for various events and meetings.

I had the opportunity to play the organ a few weeks before the congregation moved. It had a beautiful tone and was a nice organ for general worship but not suited to some organ literature. The instrument sounded rather quiet for a large room even with most of the stops drawn. This may have been due to the console placement in relation to the chamber. The chancel platform is in one corner with the chamber placed on a side wall rather than centered. The sound is therefore projected across the chancel platform and the room rather toward the console. I was able to examine an office file on the instrument which include detailed drawings of the construction of the instrument, the original contract and other items of interest. The original wooden theater style chamber grill from the 1932 Marr & Colton organ was retained. According to the Moller contract, all old chests and pipework were to be removed. However, the Trichter Regal pipes seem to be much older than other pipework and may have been retained from the Marr & Colton instrument. The entrance to the chamber, which is accessed from a hallway behind the chamber, is nearly five feet from the floor. This is due to the lower portion of the chamber grill and most pipes being even with the top level of the choir. Keeping the chamber heated to the same temperature as the sanctuary was a problem. This is partly due to the chamber structure projecting out from the main building and being above the roof of the annex; exposing three stone walls and roof to cold temperatures. To compensate, an open lattice-work panel replaced the solid chamber entrance door. Not only did this allow more heat into the chamber but one could see some of the pipes. One could also stand in the hallway, look through the chamber and view the sanctuary through the grill cloth. The motor and bellows are in the basement directly under the chamber.

Updated by Timothy E. Conyers, naming this as the source of information: News-Gazette newspaper, March 8, 2017, "Main Street Church plan to complete move by Easter" ; also personal knowledge of the instrument. In addition, Timothy E. Conyers gave this as a source of information: "Main Street Church plan to complete move by Easter" News-Gazette newspaper, March 8, 2017; conversation with a church member.
The congregation will move into a former funeral home on the southeast edge of town on Easter Sunday, April 16, 2017. The congregation had been planning to build a new church for the past two decades but the funeral home, which had once been a former church, is a newer building and the interior had recently been remodeled by the owner. It offered all the space requirements needed by the congregation and is a one level building. In the current 115-year-old structure downtown, the sanctuary is on the second level with a third floor balcony wrapping around two sides, making access difficult for elderly and handicapped persons.
In a conversation with an elderly church member, I was told the Möller pipe organ will not be moved to the new location. What is to become of it was unknown. The beautifully carved wood screen in front of the pipe chamber is from a previous pipe organ that had been installed in 1912 when the church was built. The M.P. Möller organ replaced that instrument.

Updated through online information from Timothy E. Conyers. -- The sanctuary seating is in the semi-circular style with the chancel platform in one corner. This places the pipe chamber along one wall and does not allow the sound to fully speak into sections of the nave. The pipework is behind a very ornately carved screen which probably came from a previous instrument. The console is slightly lower than the platform floor surrounding it, allowing the organist a clear view of the choir, platform and congregation. A curved wooden panel railing separates the console from the congregation. There are six general pistons located under the swell keyboard and a cancellation piston on the left side, beneath the great keyboard. The music rack folds down over the manuals when the rolltop covering is closed.

Factory Specifications & Console stops: Open In New Tab Original document from Timothy E. Conyers. Originally published 2017-06-12
We received the most recent update for this stoplist from Database Manager on April 09, 2020. 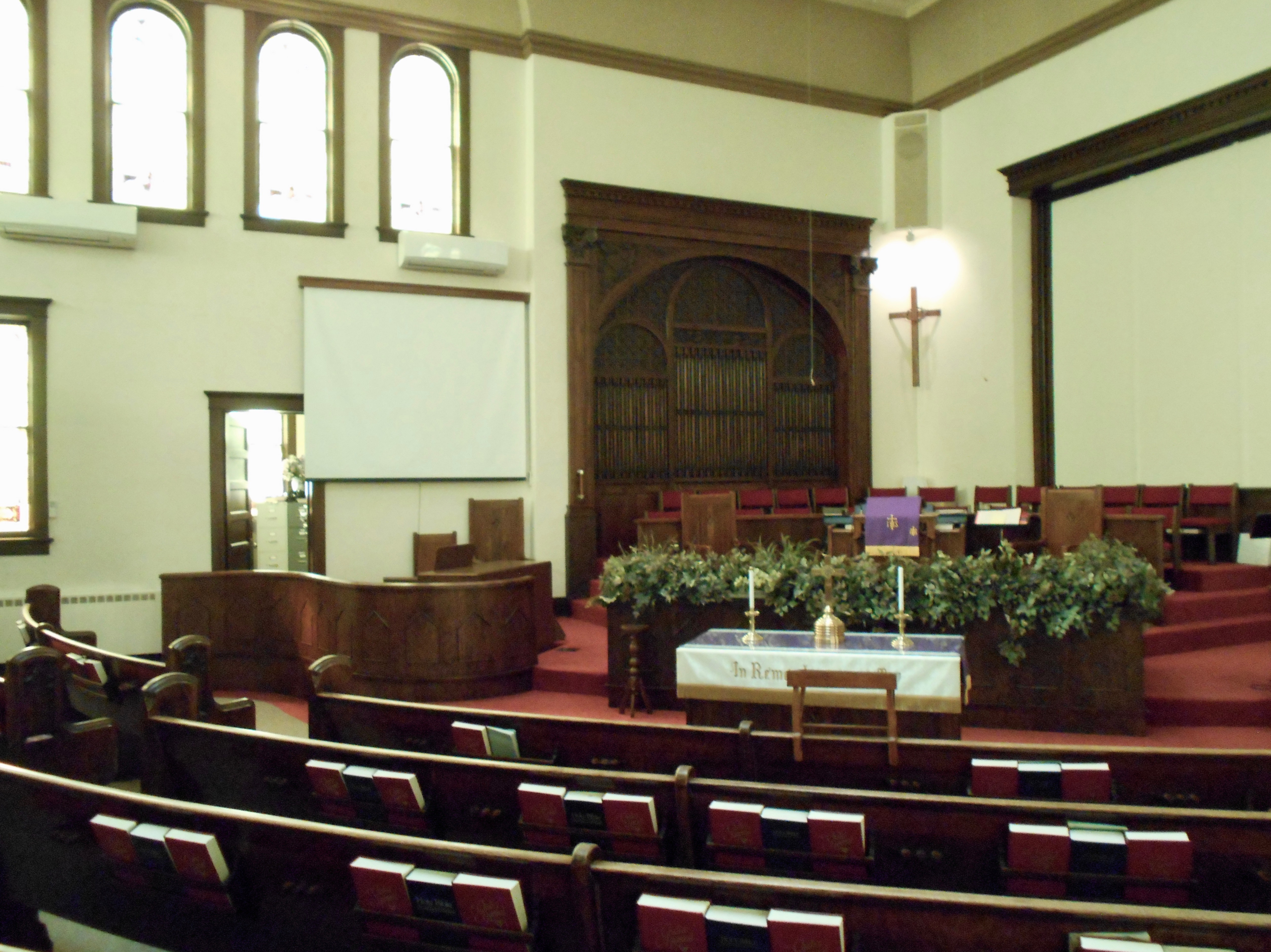 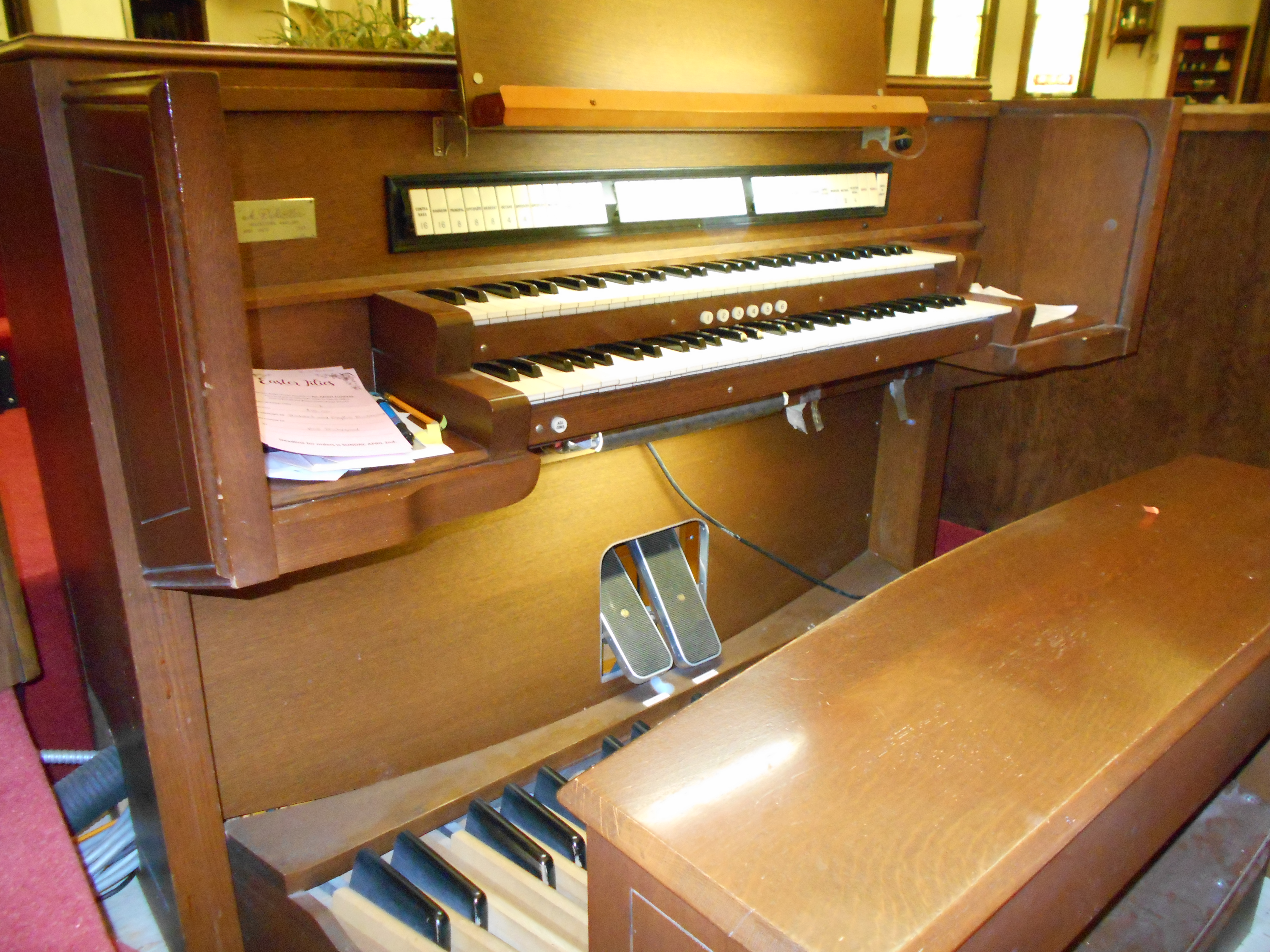 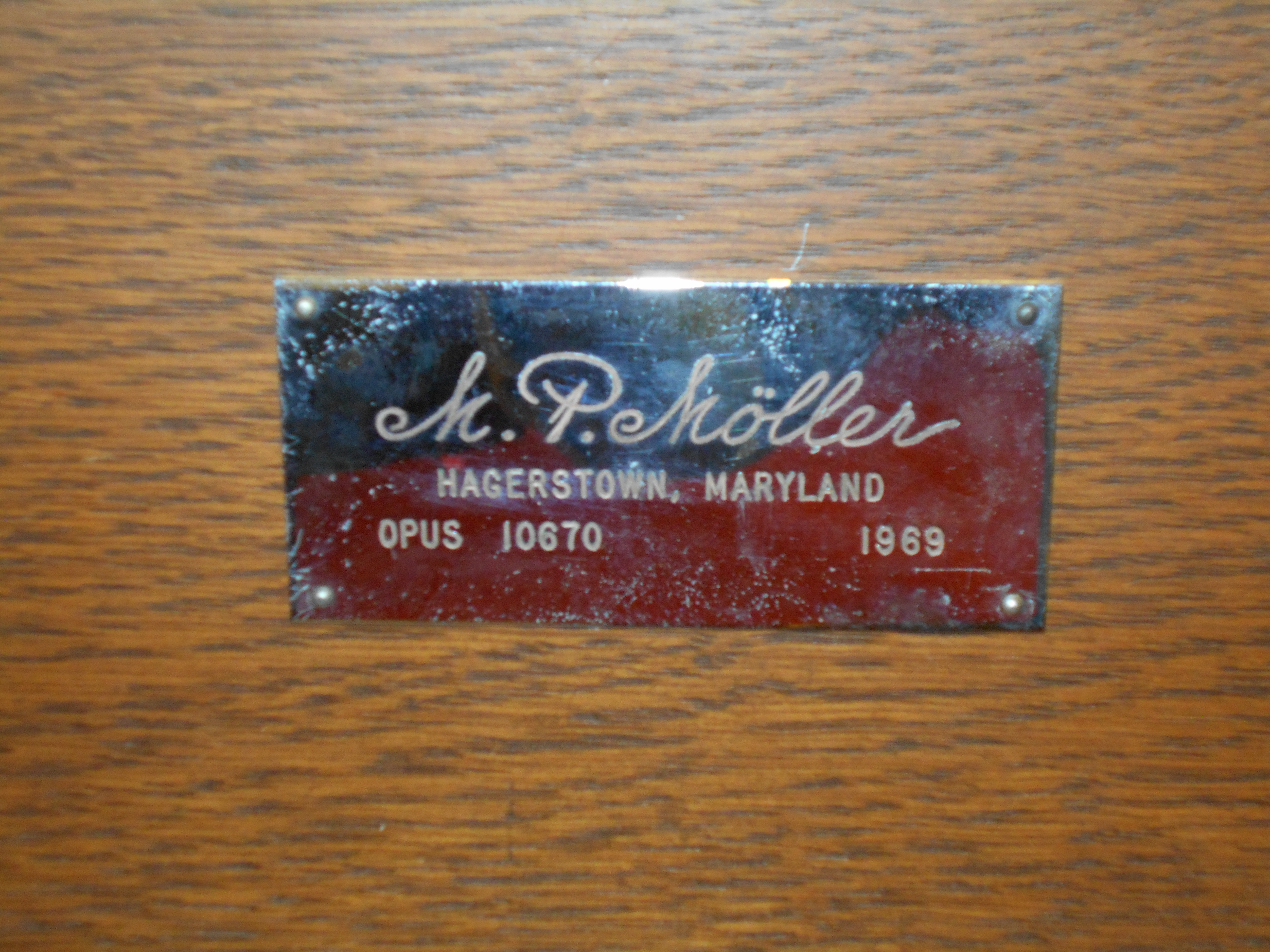 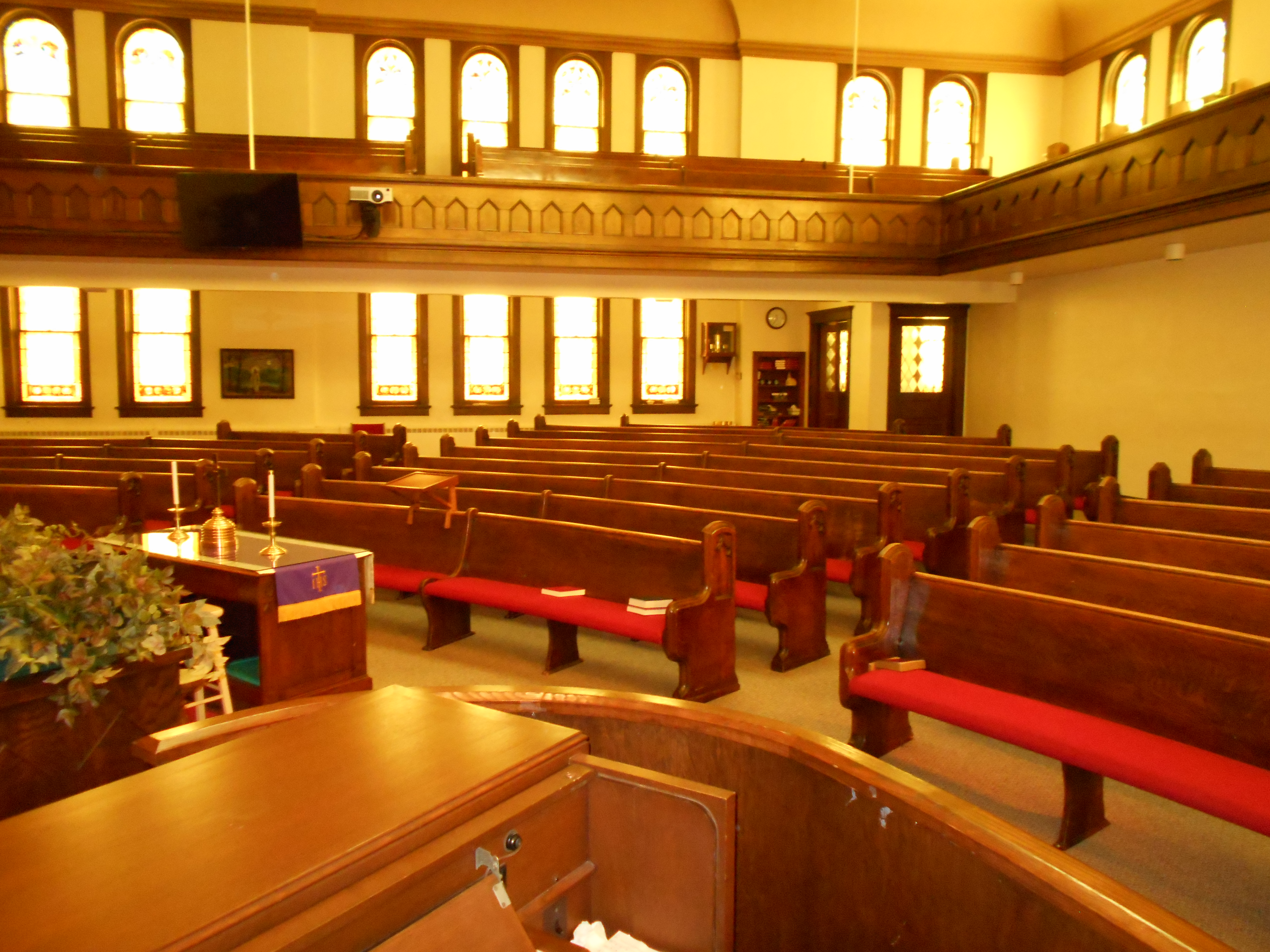 View of sanctuary from console: Photograph by Timothy E. Conyers. Taken on 2017-03-24 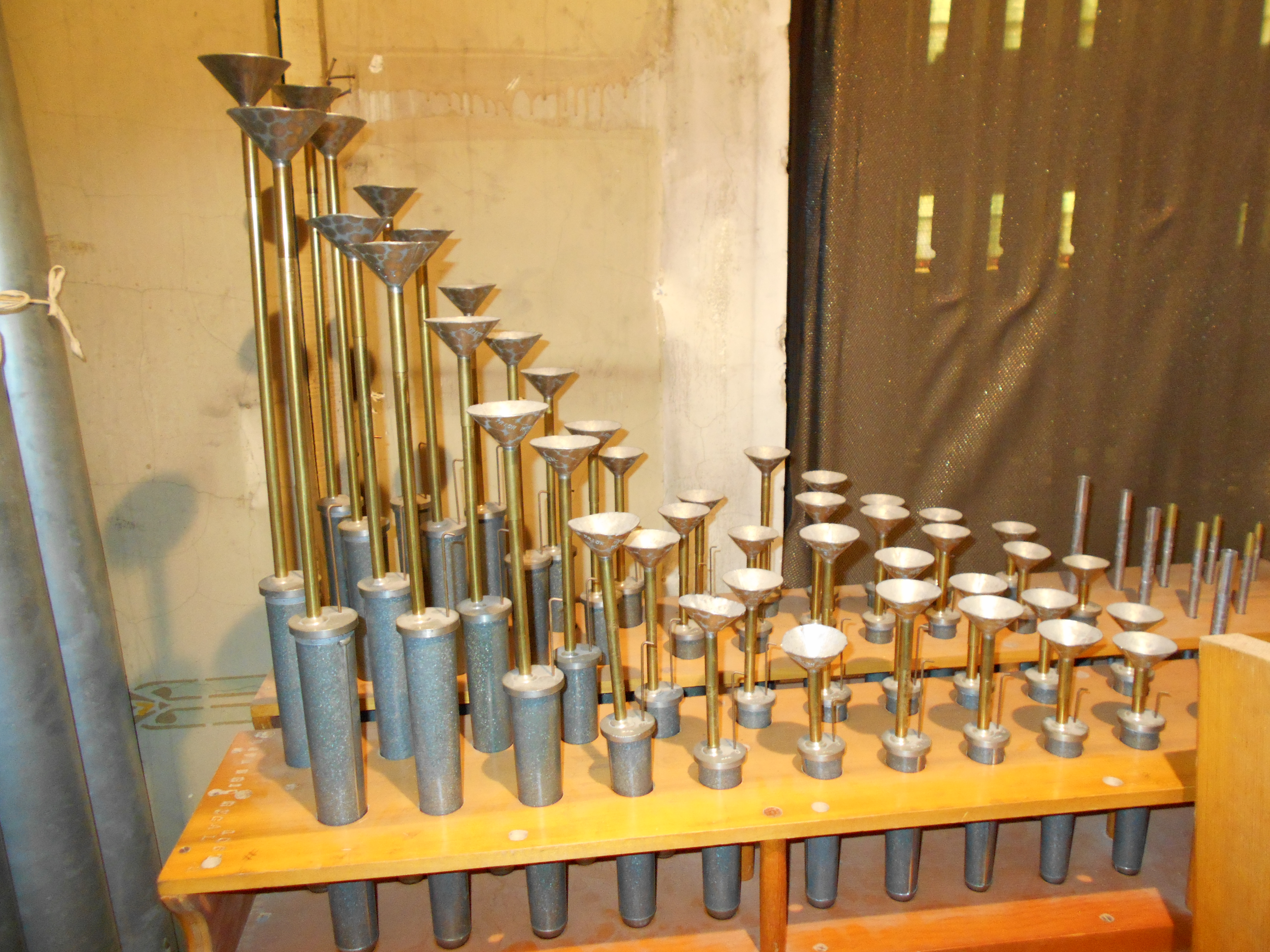