We received the most recent update for this instrument's status from H. David Vuckson on April 20, 2020.

Updated by H. David Vuckson
For about 140 years there has been a "legend" that this organ, while on-board a ship, was "thrown overboard in a shipwreck" then subsequently salvaged and purchased by Sir James Douglas (the "Father" of British Columbia) and donated to the new Church Of Our Lord. The legend was expanded over the years and according to different sources, this alleged shipwreck occurred in at least six different locations on the west coast between Burrard Inlet (Vancouver) and San Francisco and points in between. This, of course, is nonsense. What actually happened is quite different. From the reports in the British Colonist newspaper, Victoria, B.C. in December 1875 comes this information: The dual steam/sail ship "Los Angeles" departed San Francisco on Monday, November 29, 1875 under the command of Captain Charles Thorn with 236 tons of freight (including the organ) and 49 passengers for Victoria as well as freight and passengers for ports on Puget Sound. Among the passengers for Victoria was San Francisco organ builder John Bergstrom who had worked on the organ for some years in that city. The ship, formerly a revenue cutter named "Wyanda", was long and narrow. After being condemned it was sold to new owners who built cabins and houses on the deck resulting in a top heavy ship with two-thirds of it out of the water. By December 8, 1875 the Los Angeles had not arrived in Victoria and it was feared she might have rolled over in bad weather. Her machinery had broken down on Wednesday, December 1st, and the sails were put up. She was running ahead of the wind until on Sunday, December 5th the wind turned into a gale. A crew member named James Walsh was washed overboard and lost at sea that day. The disabled Los Angeles was towed into Esquimalt harbour near Victoria by a Royal Navy tug, "H.M.S. Rocket" on December 8th. The freight survived intact and a glowing testimonial was presented to Captain Thorn and his crew by the grateful passengers for their safe arrival. The organ, purchased by Sir James Douglas, was transported to the brand new Church Of Our Lord and set up by John Bergstrom and was ready to be played (hand-pumped) by the end of December. The church was formally opened on Sunday, January 16, 1876 and the organ has been in continuous use since that time.

NEW INFORMATION: This organ was examined by the OHS in 1982 following the convention in Seattle. The conclusion was that S. S. Hamill did not actually add a Swell to a one manual organ, but rather rebuilt a short compass Swell into a full compass Swell with a new chest. This was written up in The Tracker Vol. 27, No. 4, 1983 by Barbara Owen under the title, *An Early New Engand Organ on the West Coast.

Updated through online information from H. David Vuckson. -- This organ was installed in this church in December 1875. The console had folding doors at one time in its life; they are long-gone. The lone pedal stop (originally 17 notes) is labelled "Pedal Diapason" but is actually a Bourdon. One theory is that this was, at one time, an Open Wood and that it was cut in half at some time in the organ's history.
There is also an empty drawknob hole for, it appears, a long-gone 8 ft. pedal stop. The hand pumping handle is disconnected and stored inside the case. The water engine of 1879 has long since been replaced with a modern blower. The oldest parts of this organ are approximately 188 years old--the Great chest has empty pipe holes from the original GG compass. It is played every Sunday and still makes a glorious sound. Much remedial work was done on it in the 1990's.
Still, at this age, it has its quirks (runs, arthritis, etc.). It does not enjoy the occasional spell of cold/dry weather that we sometimes get in the winter. I have assisted in the instrument's maintenance for many years.

Addition of Swell division to Appleton organ of 1827.

Source not recorded: Open In New Tab Stoplist from the console April 25, 2015
We received the most recent update for this stoplist from Database Manager on April 09, 2020. 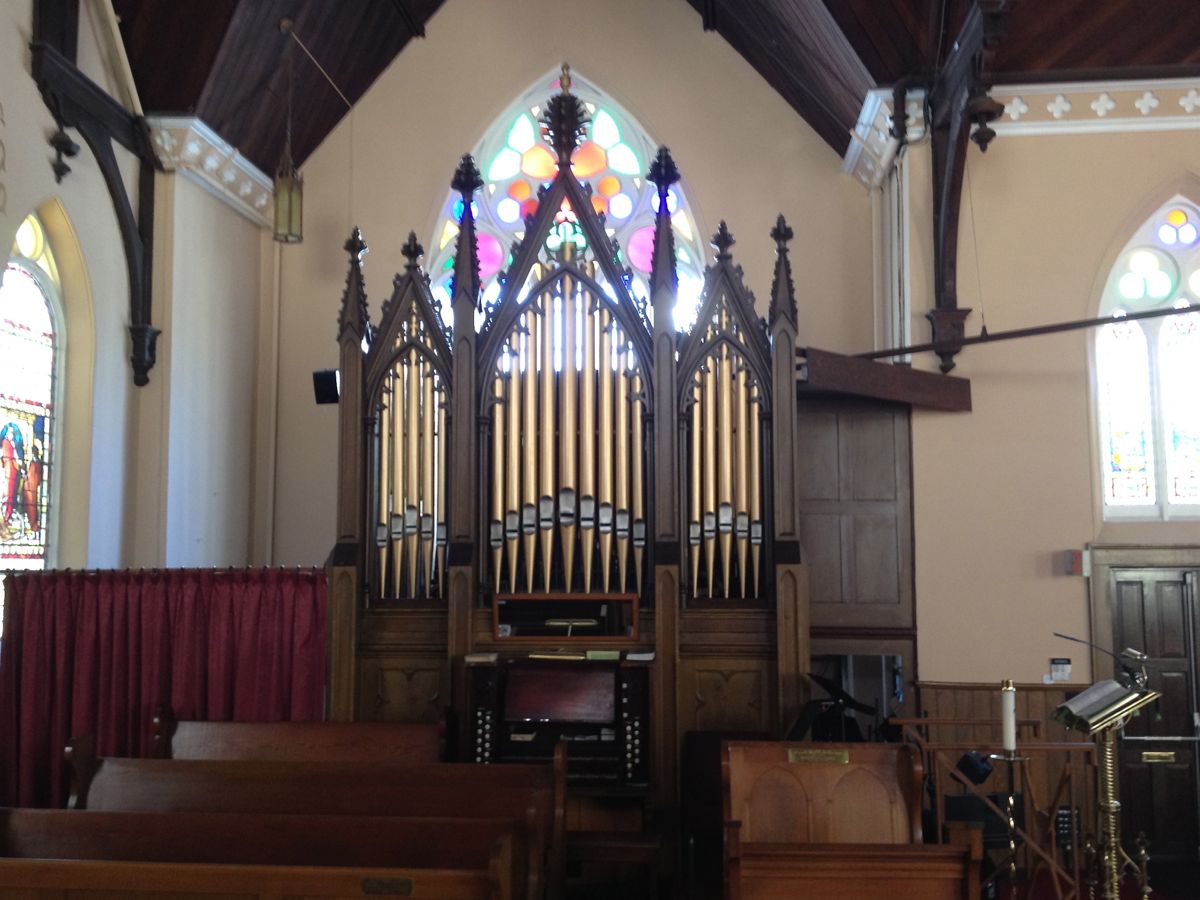 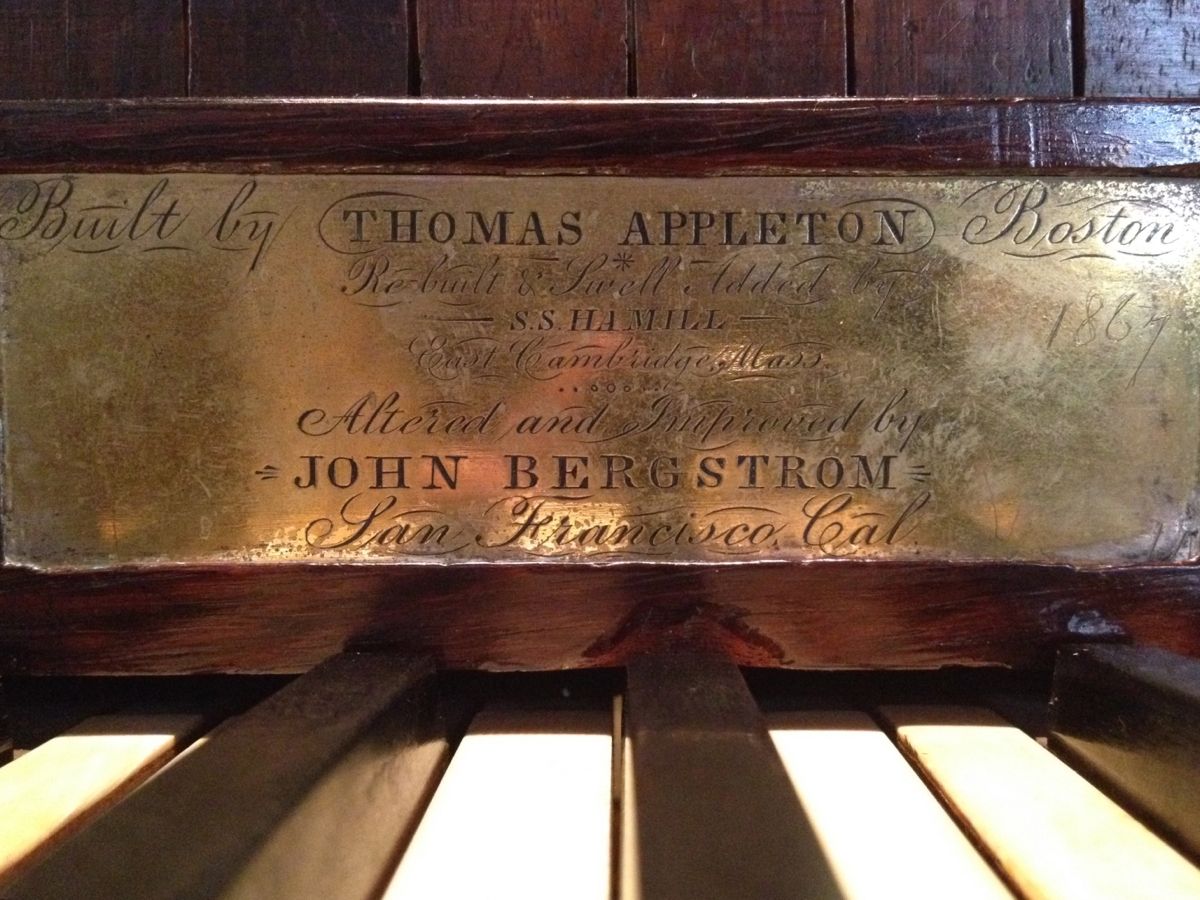 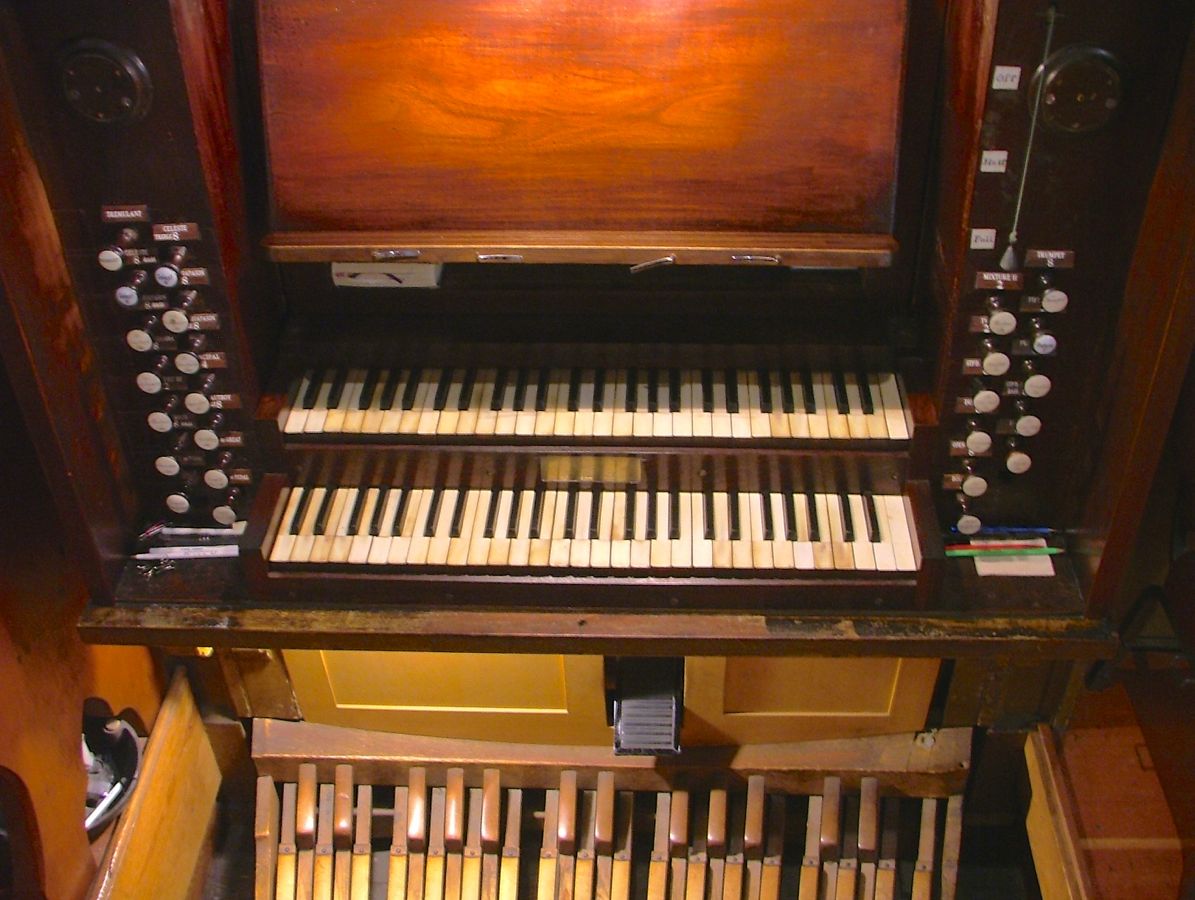 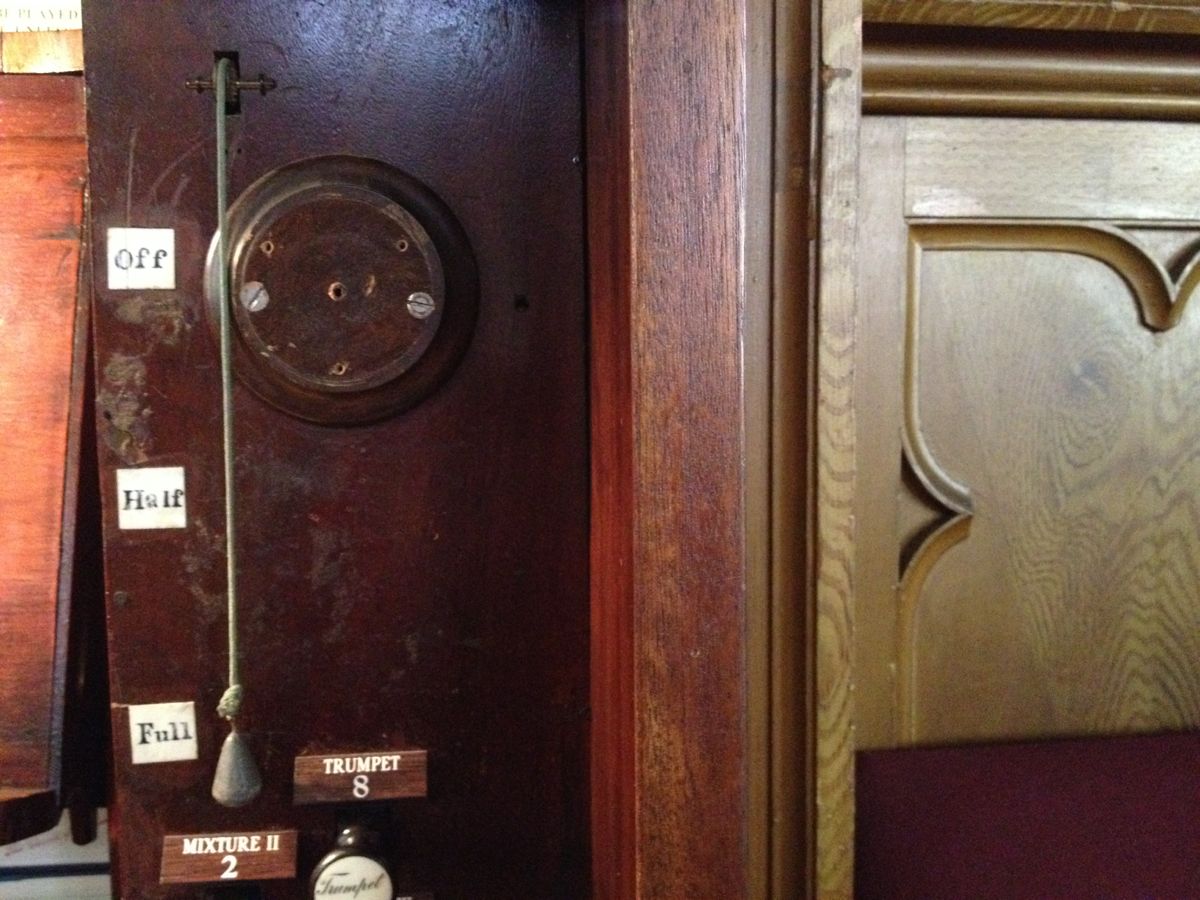 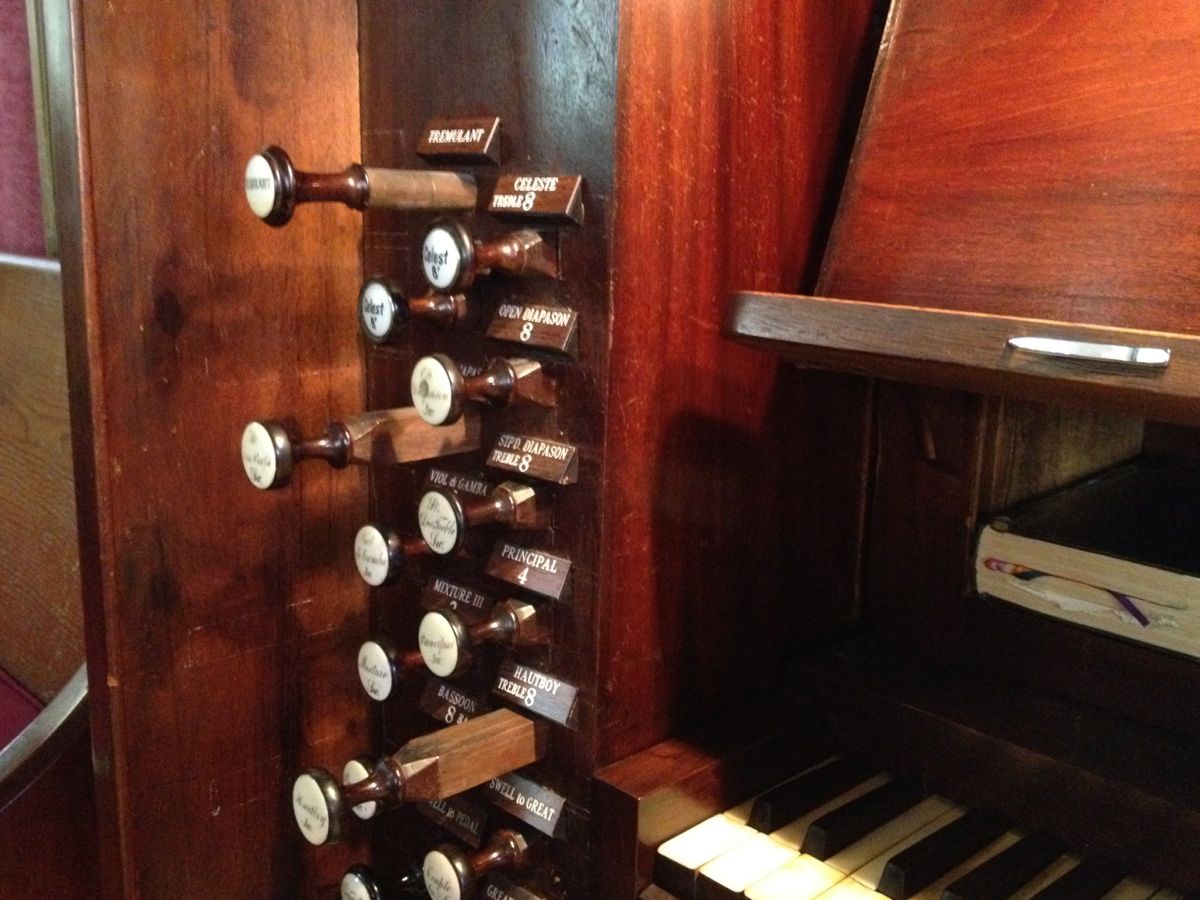 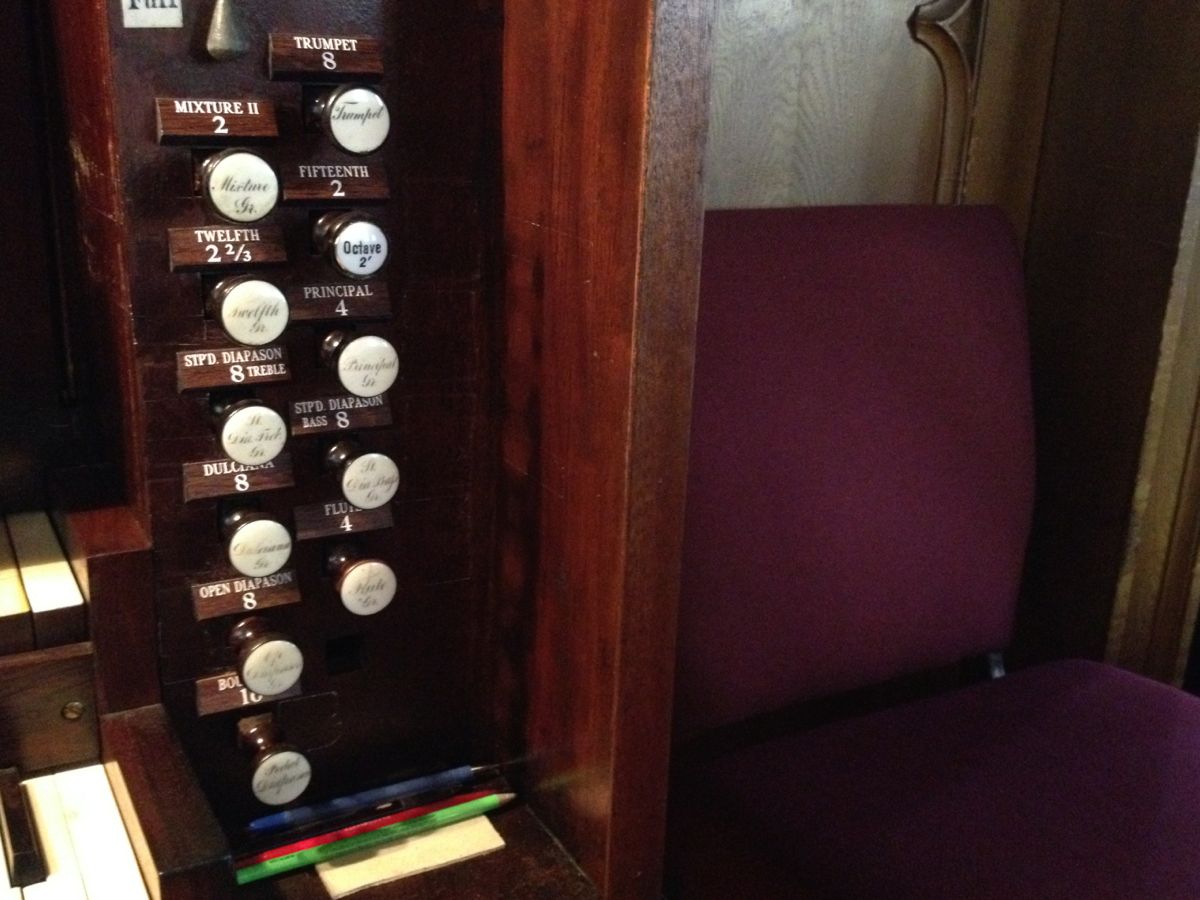 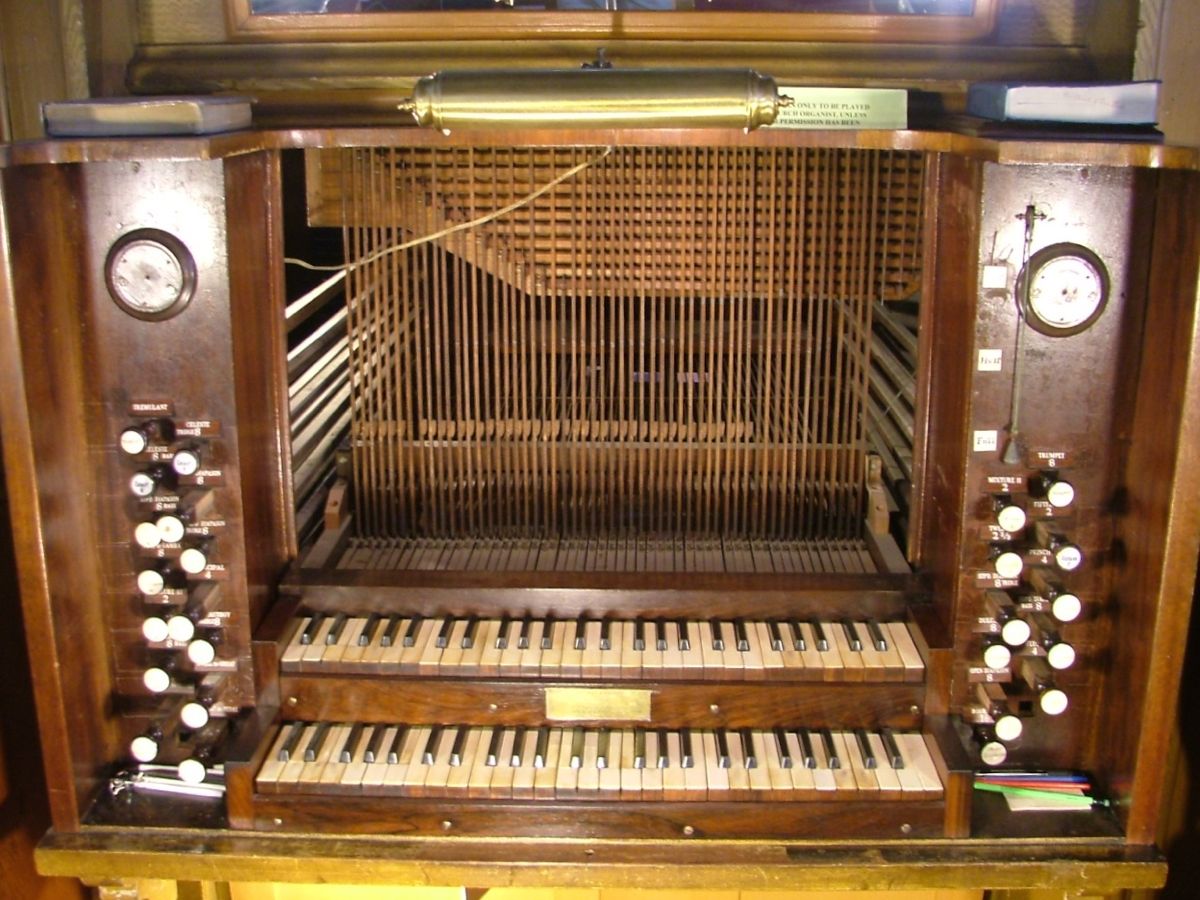 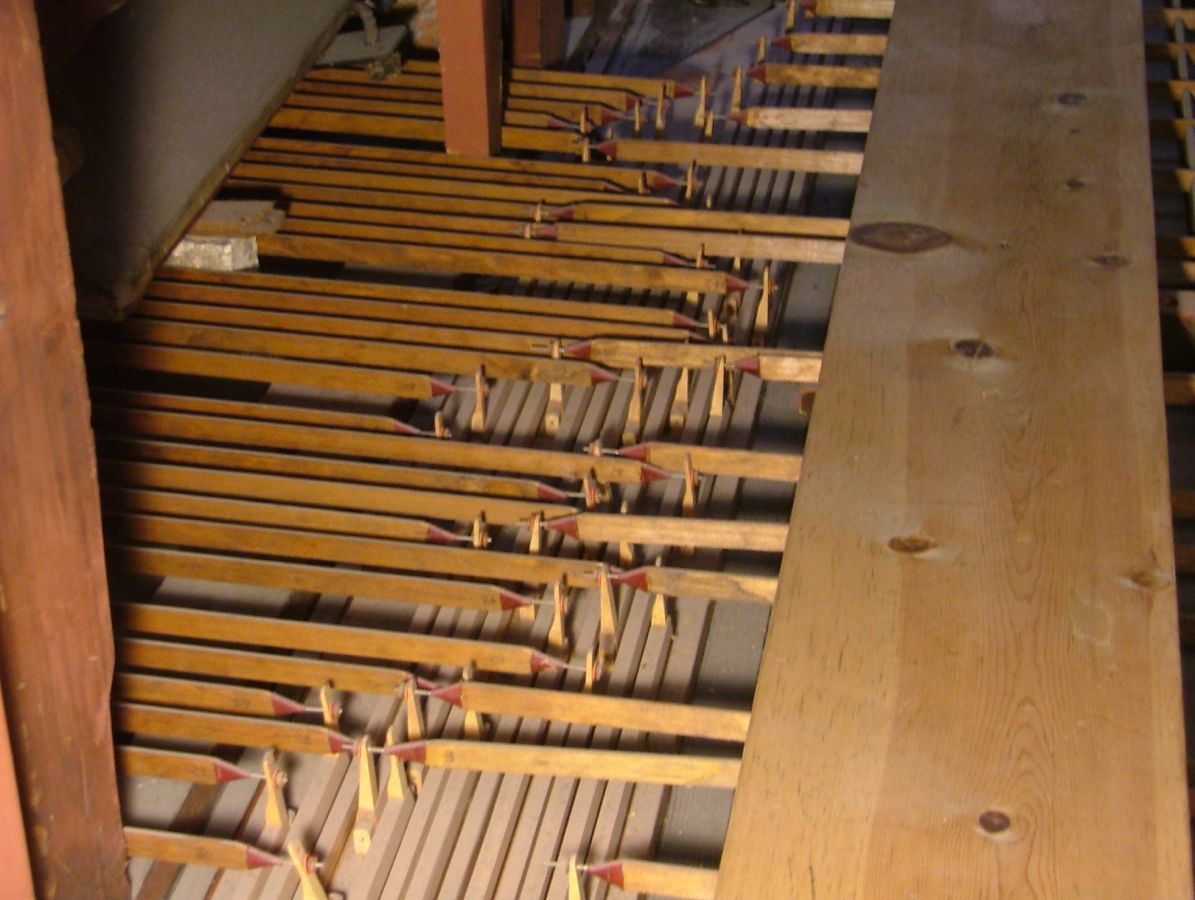 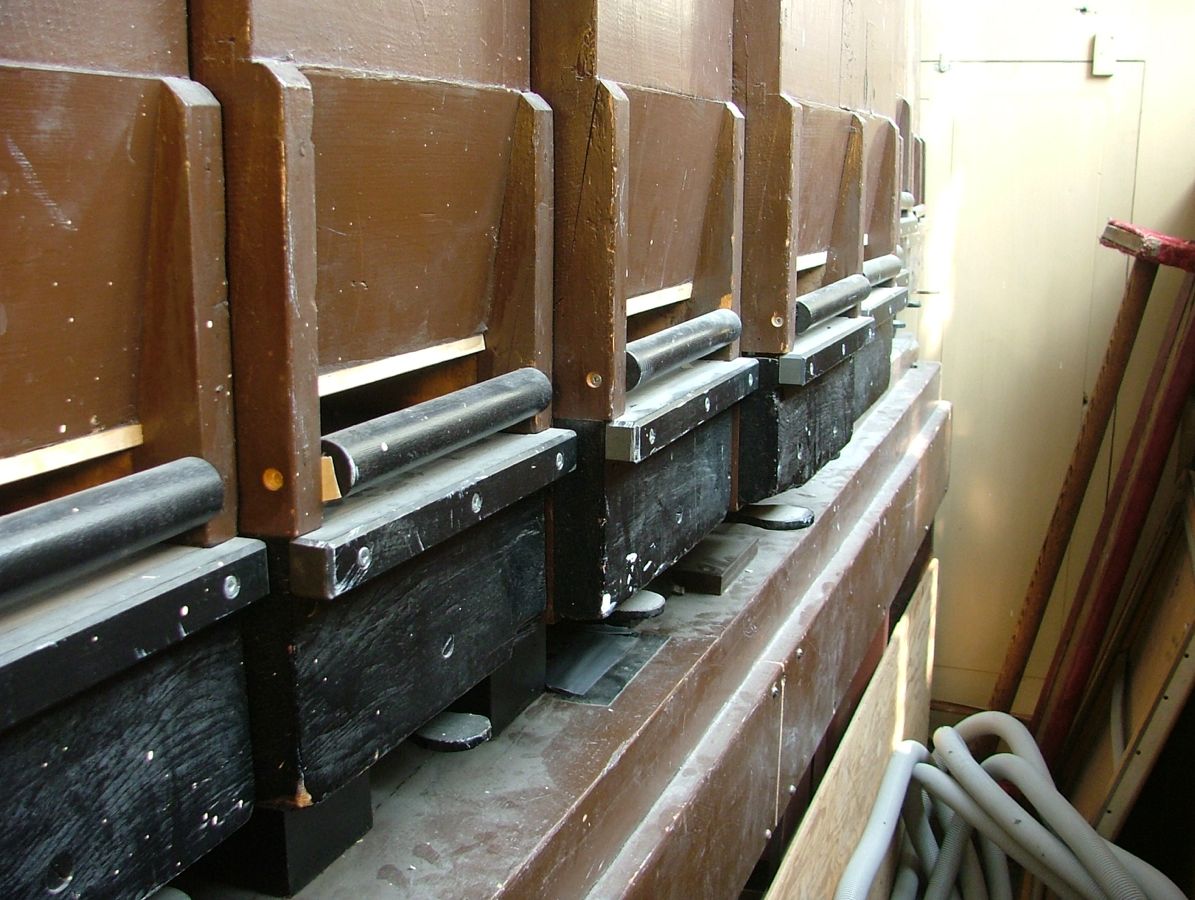 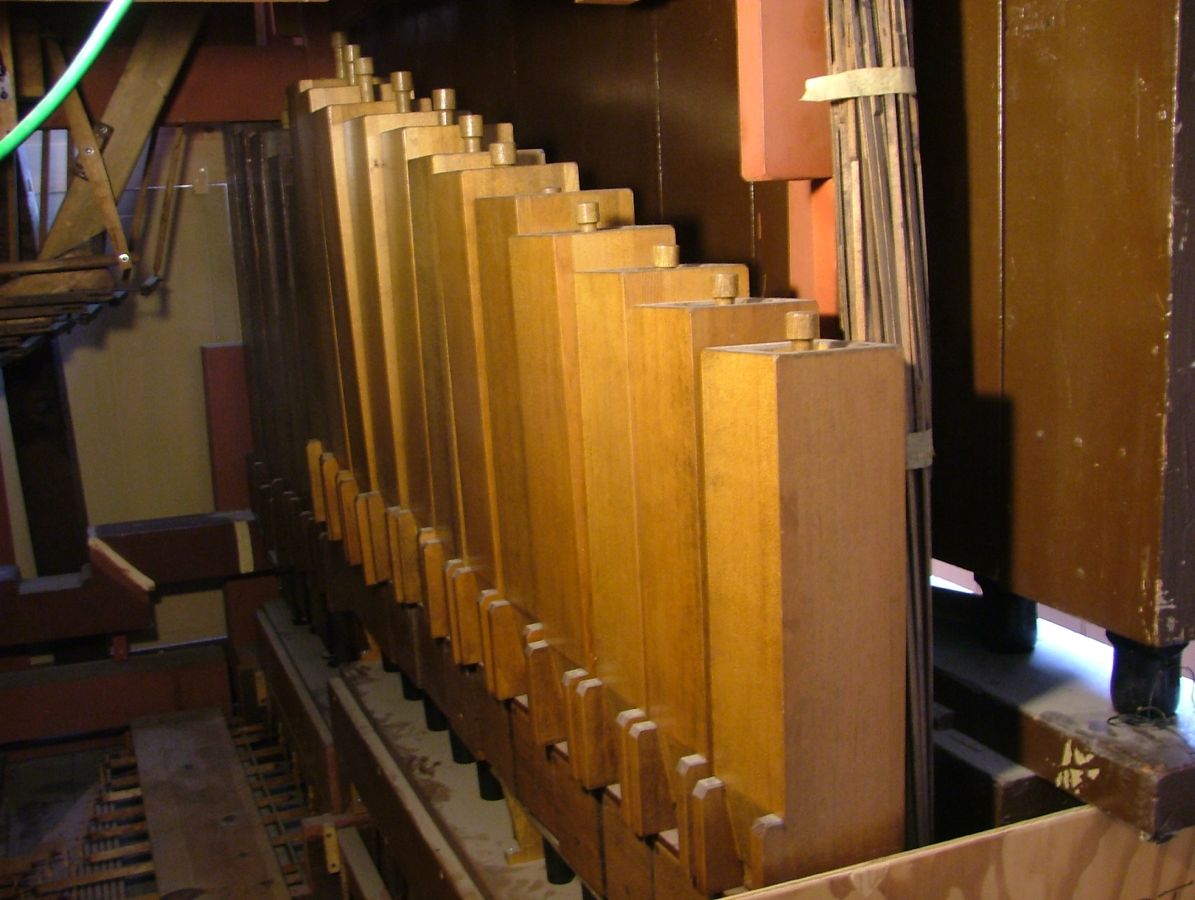 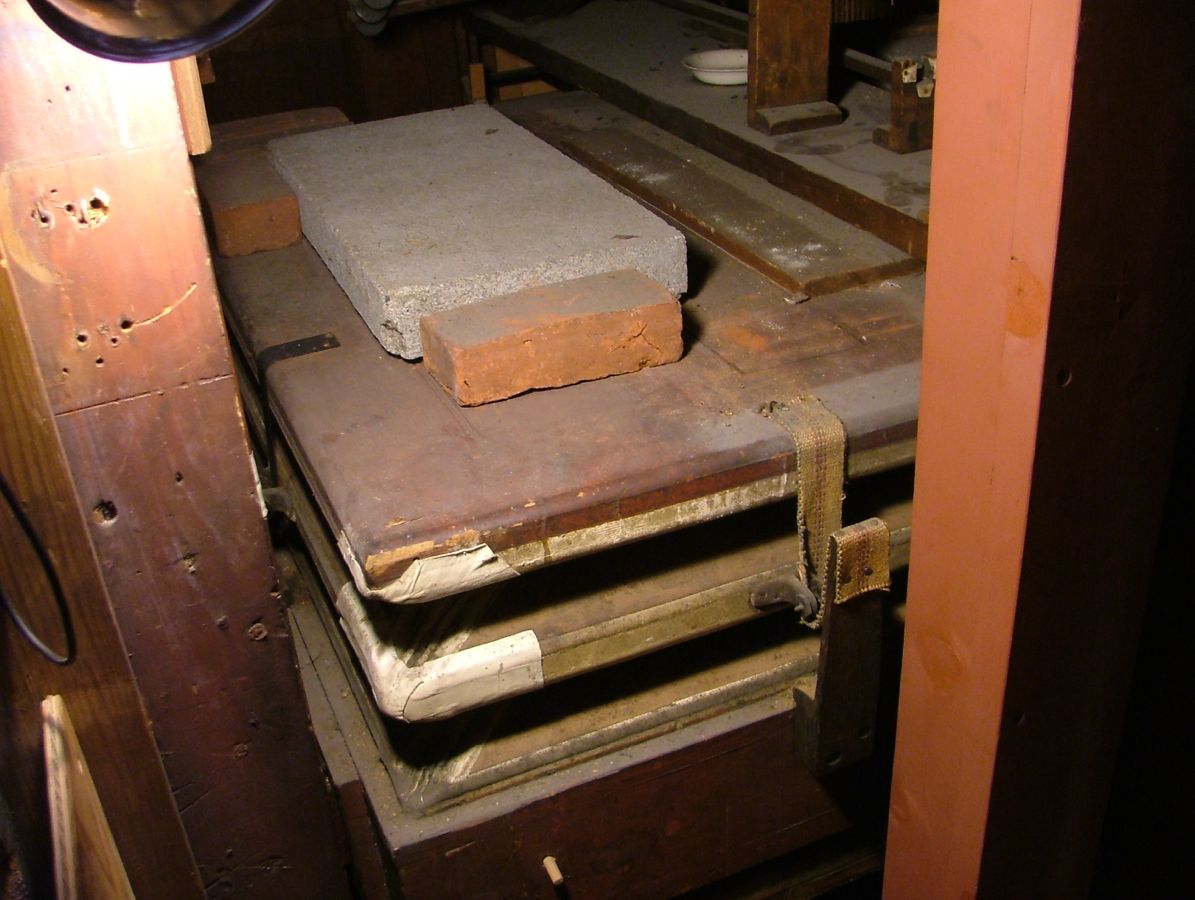 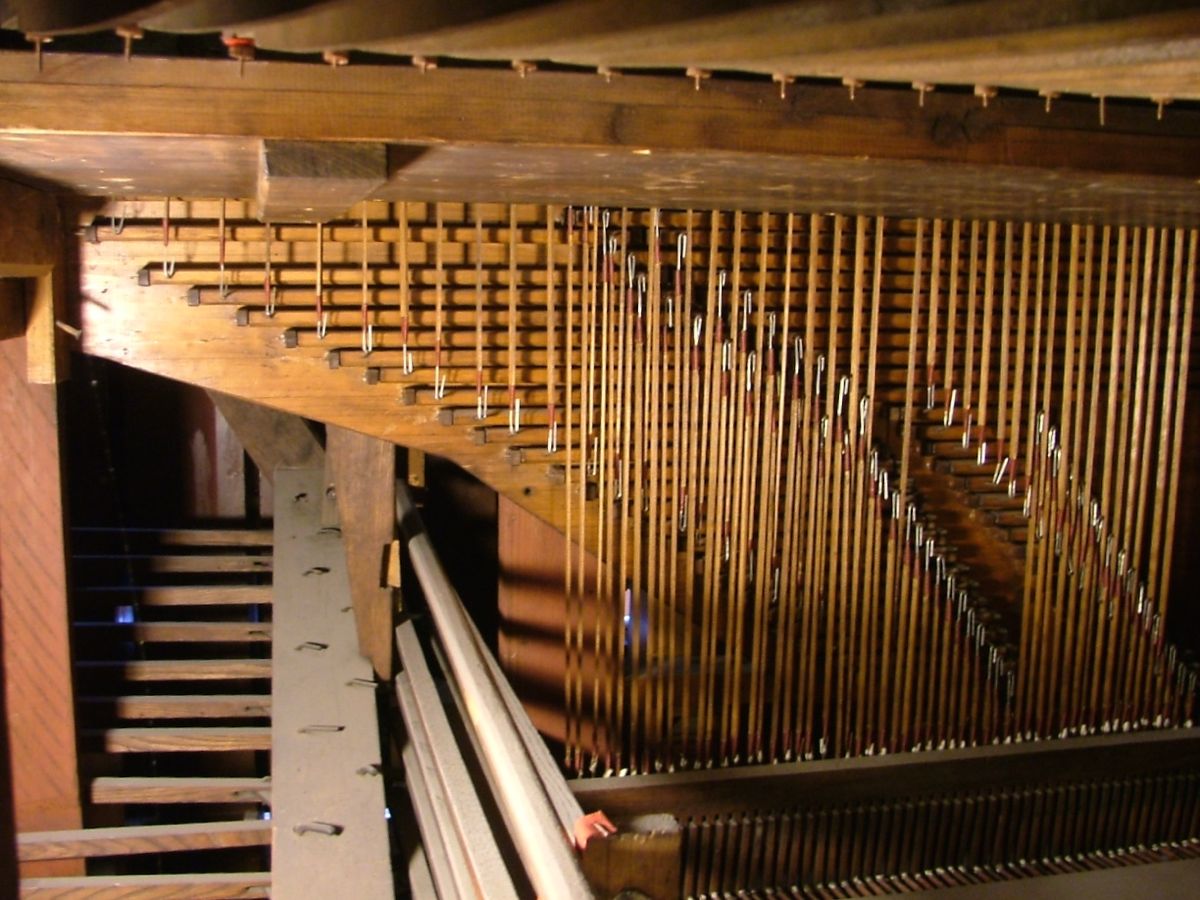 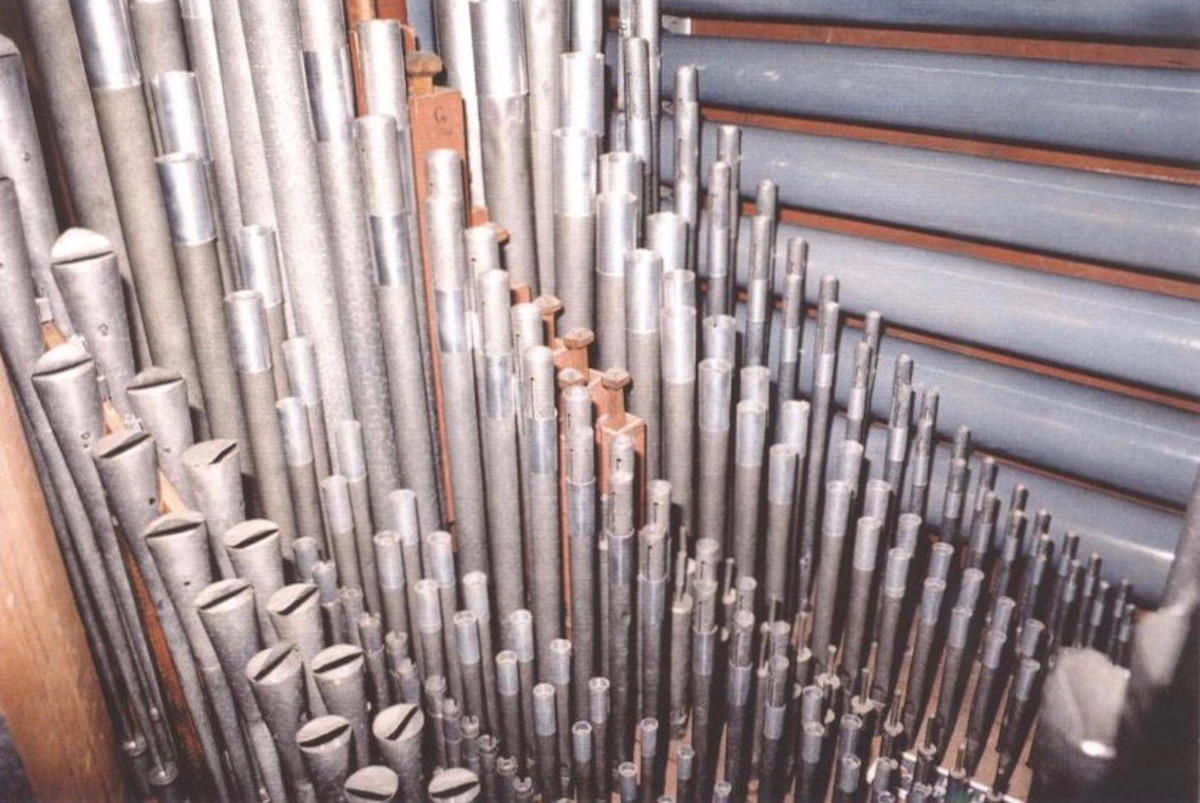 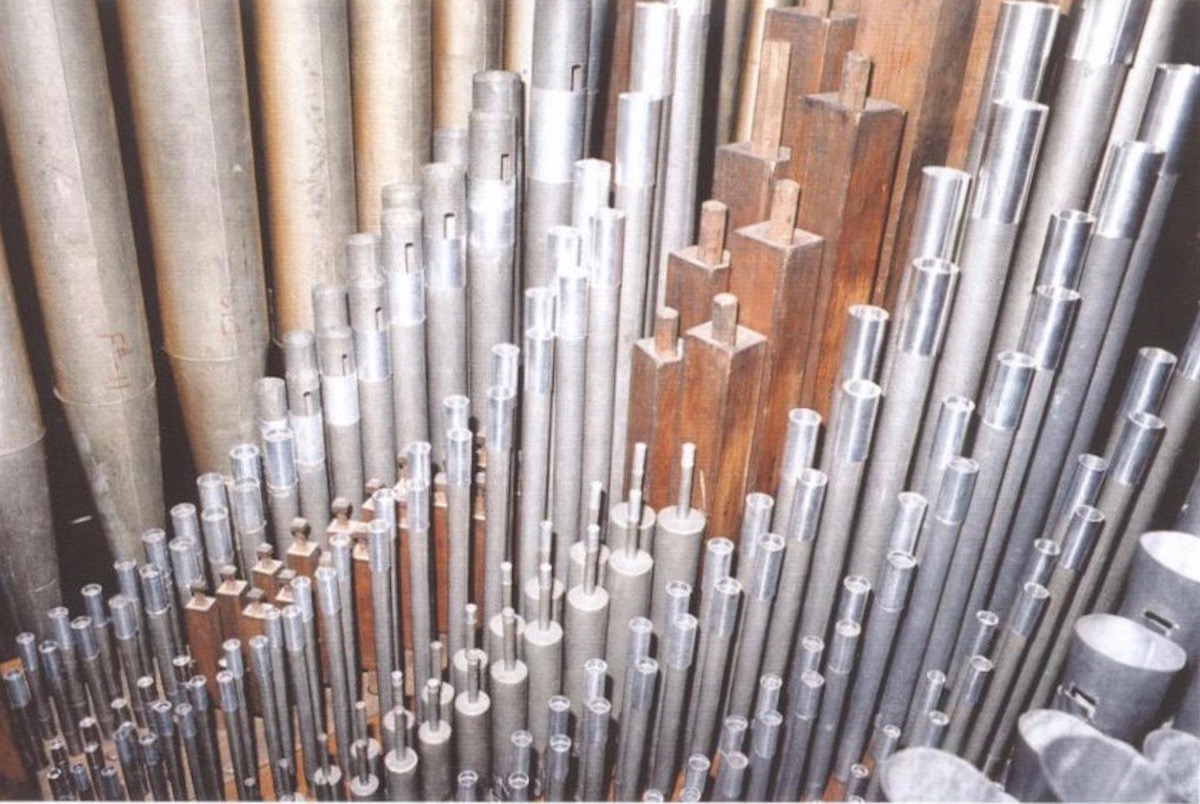 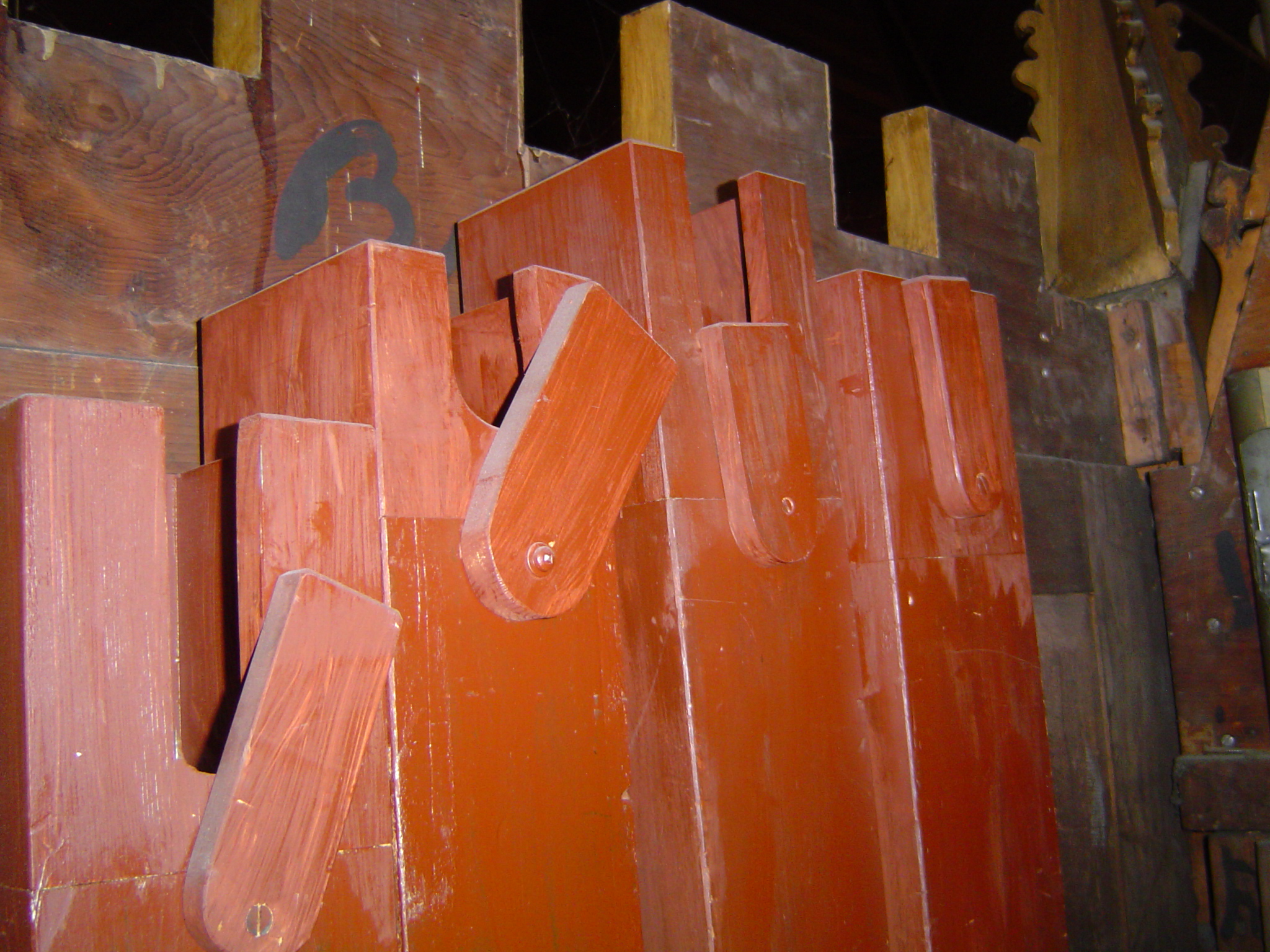 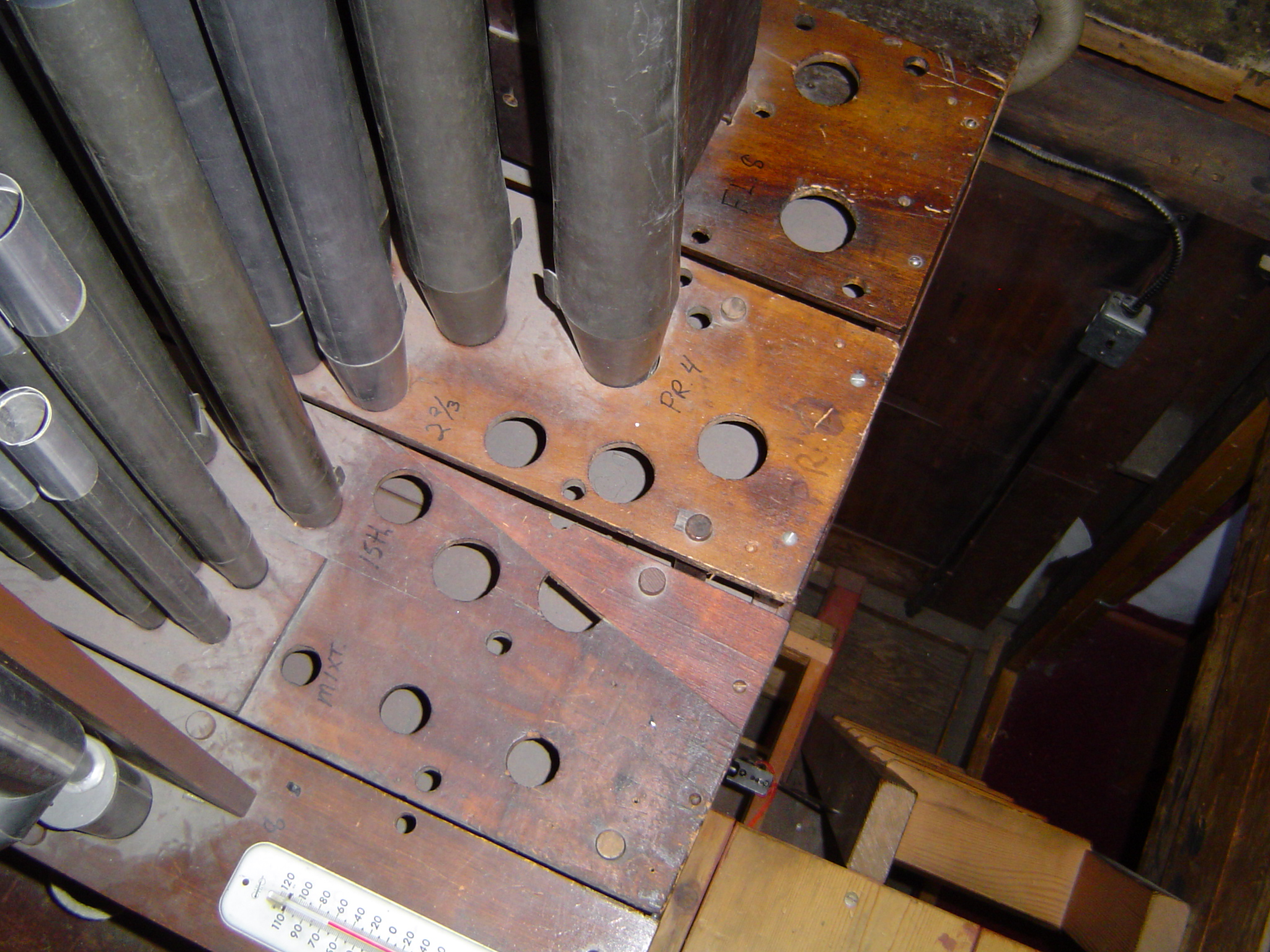 This is the C-sharp side of Appleton's Great chest from 1827 showing empty rack board holes for the original G-compass of the keyboard. : Photograph by H. David Vuckson. Taken approx. 2019

This instrument has been viewed 164 times.