We received the most recent update for this instrument's status from Paul R. Marchesano on July 13, 2021.

Correction to the July 11 post. Alfred Mangler was the son of Harold, and it was Harold, not Alfred, who worked at Hutchings on this instrument along with Arpard Fazkas. It was father and son who did a major renovation of this organ with the assistance of Mr. Fazakas in '47. Harold died in 1949, and may or may not have witnessed the installation of the new Schantz console. It is still to be determined if the 1949 work was done by Mangler with Schantz parts, or an independent alteration by the Schantz Co.

In a recent conversation with the Brown University organist in the 1980's prior to the 1991 work, the Hutchings setterboard remained in the chamber and was active, in worked in addition to the adjustable combinations available in the new console, giving this instrument an early example of a multi-level combination system. Apparently the console was worn out by 1991, which was the reason for its Moller replacement.

The Swell shade assembly was bumped forward toward the facade to accommodate the two new pneumatic chests, and the case sides extended with beadboard (the original enclosures are double walled). One chest was high (static) pressure for the new Trumpets at 8 and 4, and a second chest for the new low-pressure Clarion and Nasard. The original Swell had two main chests, front and rear with a walkboard between them, and a 'flying' chest above the rear chest, holding the Vox, 2' and Cornet-- the bottom octave of 3 ranks omitted the 4' pitch, and the longest 2 2/3' pipes are mitered(!) to fit under the ceiling. The organ still retains this layout.

The cantilevered facade extends some distance beyond the main structure-- the distance between them originally empty-- now the upper half being filled somewhat with the forward extension of the Swell box. The pedal fills the case on the right side--an area extending from the right round tower to the right wall of the gallery, and there are chests on two levels- floor level and Great/Choir level. The Great is roughly in the center with the Swell above, and the Choir is beside it to the left, immediately behind the pierced corbels below the facade impost. The original setterboard was located just inside the Pedal department door.

The organ was given by Lucian Sharpe ('93), head of Brown & Sharpe of Providence-- one of the country's leading manufacturers of precision tools until it was bought out in 2001. The organ was given in memory of Lucian's father, himself an alumnus of Brown. The University had been lobbied by the student body for a several years to acquire an organ, but the insitutution's support of the instrument in recent decades has been meagre. The instrument joined a number of significant college instruments built by Hutchings about the same time, including Yale, New England Conservatory, Vassar, and upper class preparatory schools Lawrenceville Academy, Pomfret School, and Northfield Academy. None of these instruments remain extant, and the Brown instrument is the largest Hutchings concert organ now extant.

The instrument was renovated in 1947 by former Hutchings employees Alfred Mangler of Providence and Arpard Fazakas of Nutley, New Jersey. Both worked together on this instrument in the factory, Fazakas later operating the New York City Hutchings office and eventually working for Steere in Springfield. Mangler had settled in Providence where there were a large number of Hutchings instruments in a 50-mile radius to maintain. The organ was releathered, but the University was parsimonius with the available funds, so the work was laboriously done in-situ. A new Schantz console was installed about this time, possible as part of this project.

The blowing plant was originally operated by a large DC motor belted to a crankshaft operating the feeders, (as were all the large church organs on the hill including the Hutchings at the nearby Christian Science Church), taking their power from the trolley line. When the trolley's were removed just prior to WWI, a 500 volt AC line was laid down, and a Spencer blower was installed. When the 500 volt line was replaced with lower voltage, the Narragansett Electric company wire up a transformer to power the 500 volt Spencer motor. With the conversion of the organ's main power to AC, a 6 volt DC generator was belted off the blower motor to operate the Hutchings magnets, which remained in good condition until the the chests were unfortunately discarded in 1991.

The organ received some restorative repairs by Nelson Barden and Associates in the early 1980s. In 1991, the Potter-Rathbun company, (also the New England Moller rep), replaced the original Hutchings sidebar pitman chests with new Moller slider chests, and replaced the pneumatic Schantz console with a new Moller console with a solid-state Peterson control system. Now growing unreliable in 2021, a new Peterson system with all the bells and whistles is being installed by the Ortloff Organ Company. At some point prior to the 1991 work, the organ underwent several tonal alterations including loudening of the Diapason chorus, a high-pressure Trumpet unit added to the Swell, and the Sw. Violina moved to the Choir and replaced with an Octave 4'.

We received the most recent update for this note from Scot Huntington on July 11, 2021.
Database Manager on October 30, 2004:

Dedication brochure: Open In New Tab Dedication recital by August Wiegand. Originally published June 16, 1903
We received the most recent update for this stoplist from Scot Huntington on July 11, 2021. 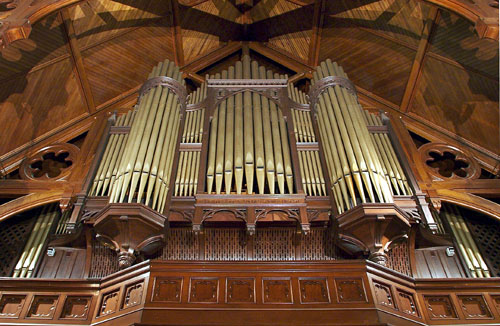 This instrument has been viewed 199 times.