We received the most recent update for this instrument's status from Jim Stettner on May 28, 2021.

Great: We received the most recent update for this division from Jim Stettner on February 27, 2021.

Swell (Expressive): We received the most recent update for this division from Jim Stettner on February 27, 2021.

Pedal: We received the most recent update for this division from Jim Stettner on February 27, 2021.

Main: We received the most recent update for this console from Jim Stettner on May 28, 2021.

I examined the organ on May 25, 2021 and can confirm a number of points. The organ is a tracker ventil chest and highly unusual. The action is nearly identical to that developed by Hillgreen-Lane and used in their pneumatic organs for decades. Every rank is placed on a ventil cell which is energized or exhausted by the stop action. Every pipe has its own valve and valve spring, mounted on the side wall of the ventil cell. There is a thin horizontal wire which passes through the chest front to back and is connected to the mechanical action. There is an adjustable nut for every valve mounted on the action wire which is adjusted to cause the vavles to open simultaneously. The action therefore has no pluck, is extremely springy throughout its travel, and frankly feels terrible. However, it is also very light and gives the player an exceptional degree of control to shape both the attack and release-- far more than is available on any slider chest action.

The organ was rebuilt by the Schlicker company in 1970 in the prevailing style of the day, and the work was very well done-- better than most such rebuilds taking place during the period. The Viner chests were restored as was the Viner key action. the Viner double-rise reservoir was replaced with new floating top reservoirs-- one each for Swell and Great-- and the winding is now sub par; and the organ was tonally rebuilt with new pipework and six original but altered ranks in the classical style. The church is considering a conservation proposal which if completed, would restore the original winding characteristics with a reconstructed double-rise reservoir.

In the 1940s, the congregation withdrew from the Congregational denomination and realigned themselves with the Presbyterian church, and more recently realigned themselves with a more conservative branch of the Presbyterian faith. Originally, the facade pipes were gold with a golden oak case. The pipes have since been painted white, with a witness patch on the back of one pipe showing each layer of the five subsequent white repaintings. The appearance of the church would definitely be improved if the original case and facade treatments were restored.

Sadly, little remains of the work of Viner Sr. and this is now the firm's second oldest extant organ.

Database Manager on October 30, 2004: Still tracker? [Identification of congregation unclear from this information.]

We received the most recent update for this note from Jim Stettner on February 26, 2021.
Scot Huntington on February 25, 2021:

The stoplist for this organ is found in the Viner ledger book in the American Organ Archives, but the entries are for the most part undated. Viner left Johnson & Son in 1896 shortly before the firm shut its doors, and after returning to Buffalo built organs for a period in virtually the same style before veering off into the more symphonic tonal directions of the day. The first 100 or so organs in his ledger are the stoplists for the Johnson organs he worked on in the factory, complete with scaling information and he continued the practice of including scaling data for his own organs. Unlike Johnson, he embraced tubular-pneumatic and electro-pneumatic actions early in his career and is believed to have used an early form of individual valve actions like Baumgarten and Hillgreen, Lane & Co. attached to tracker action instead of slider chests. The ledger book description for this organ enigmatically states simply that it has "individual valves" and "tracker action", but would seem to specifically imply this organ did not have slider chests. Examination of the extant organ would be very revealing in that regard. Originally the feeders were pumped by a Ross Water Motor that was upgraded by Viner to a 1/3 hp Spencer Orgoblo in 1925. The sales price of the organ was $1565.00.

We received the most recent update for this note from Scot Huntington on February 25, 2021.
Database Manager on December 10, 2018:

Updated by T. Bradford Willis, DDS, who gave this as the source of the information: Vintage Postcard showing a pipe organ in the chancel of the church..

This entry describes an original installation of a new pipe organ.
Identified by T. Bradford Willis, DDS, who gave this as the source of the information: Vintage Postcard showing a Viner & Son organ in the chancel of the church circa 1900..
This entry may be the same as organ ID 3948.

We received the most recent update for this note from Database Manager on December 18, 2018. 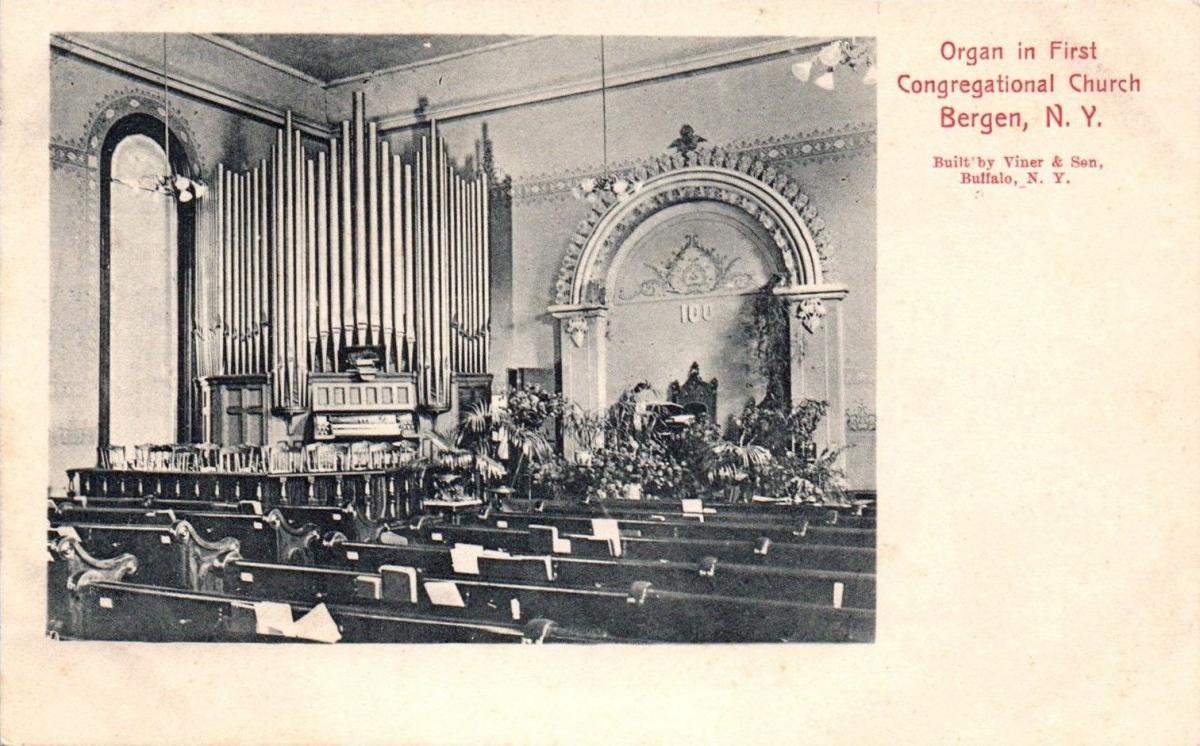 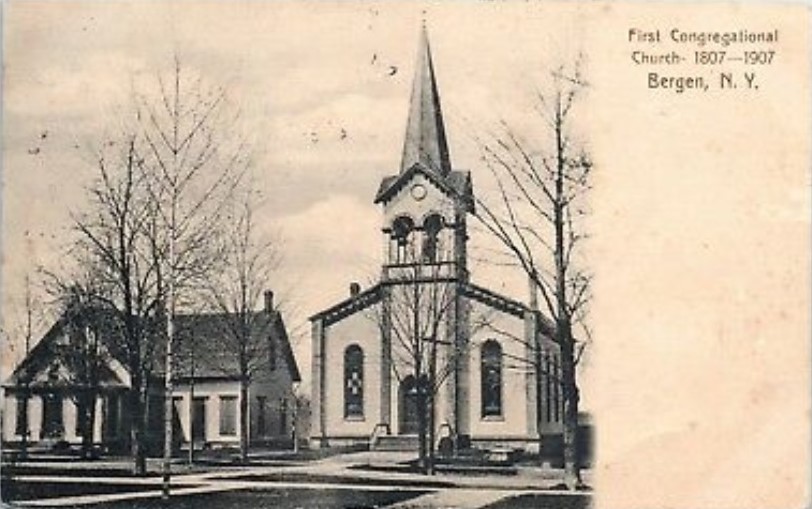 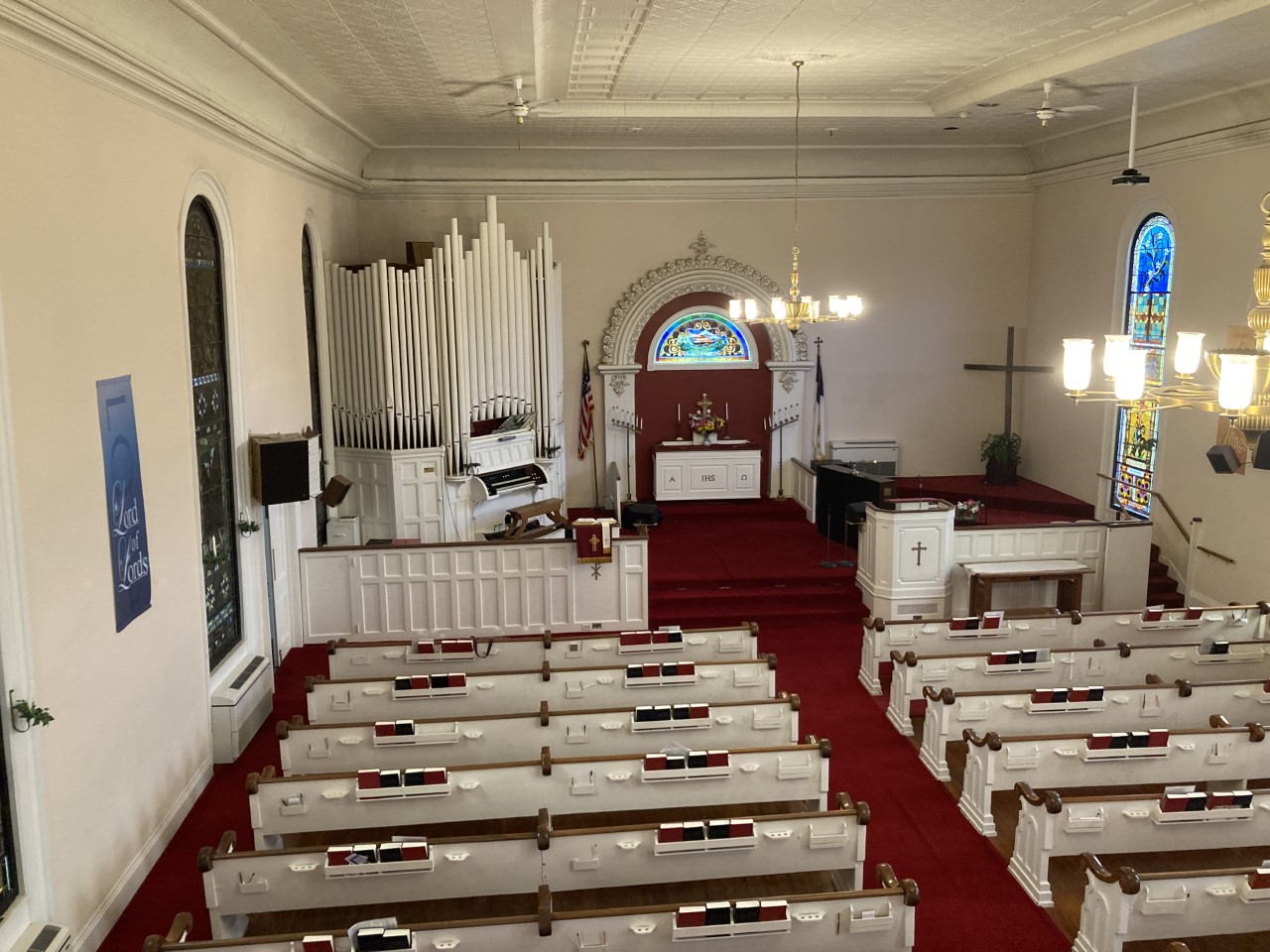 Sanctuary interior with organ in front from rear gallery: Photograph by Alden Snell. Taken on 2021-07-11 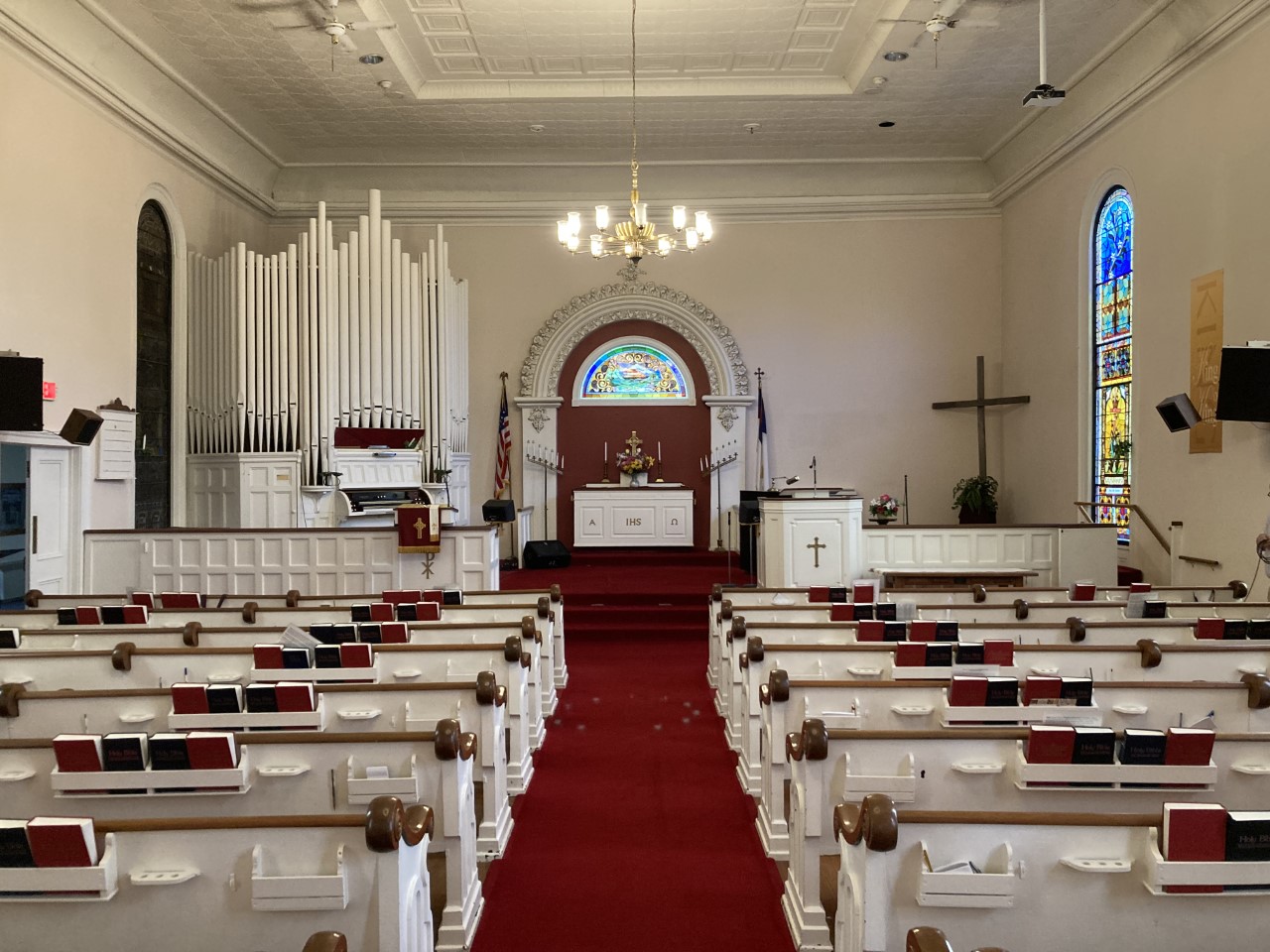 Sanctuary interior with organ in front: Photograph by Alden Snell. Taken on 2021-07-11 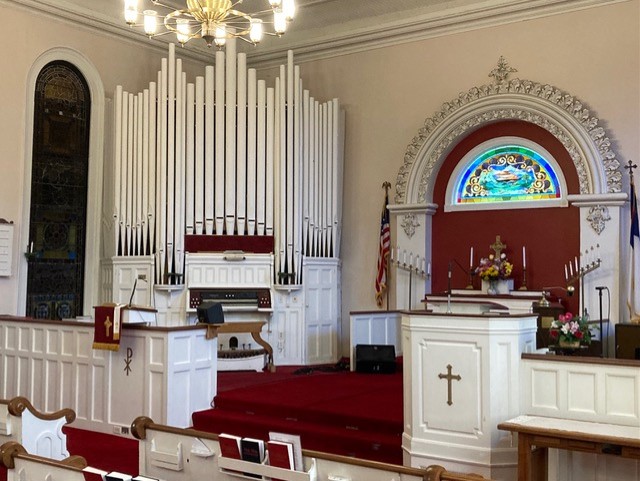 Chancel and choir gallery with organ: Photograph by Alden Snell. Taken on 2021-07-11 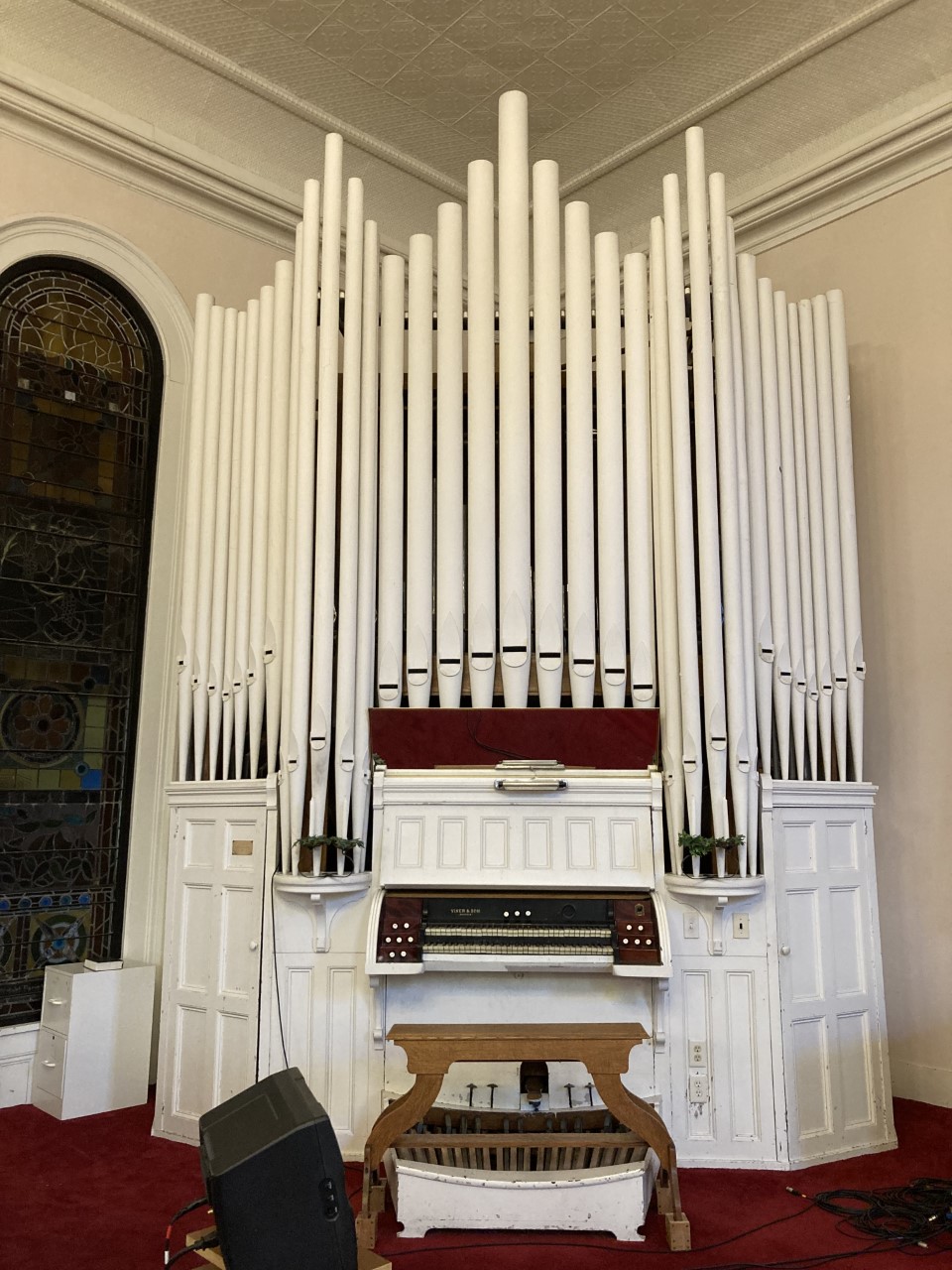 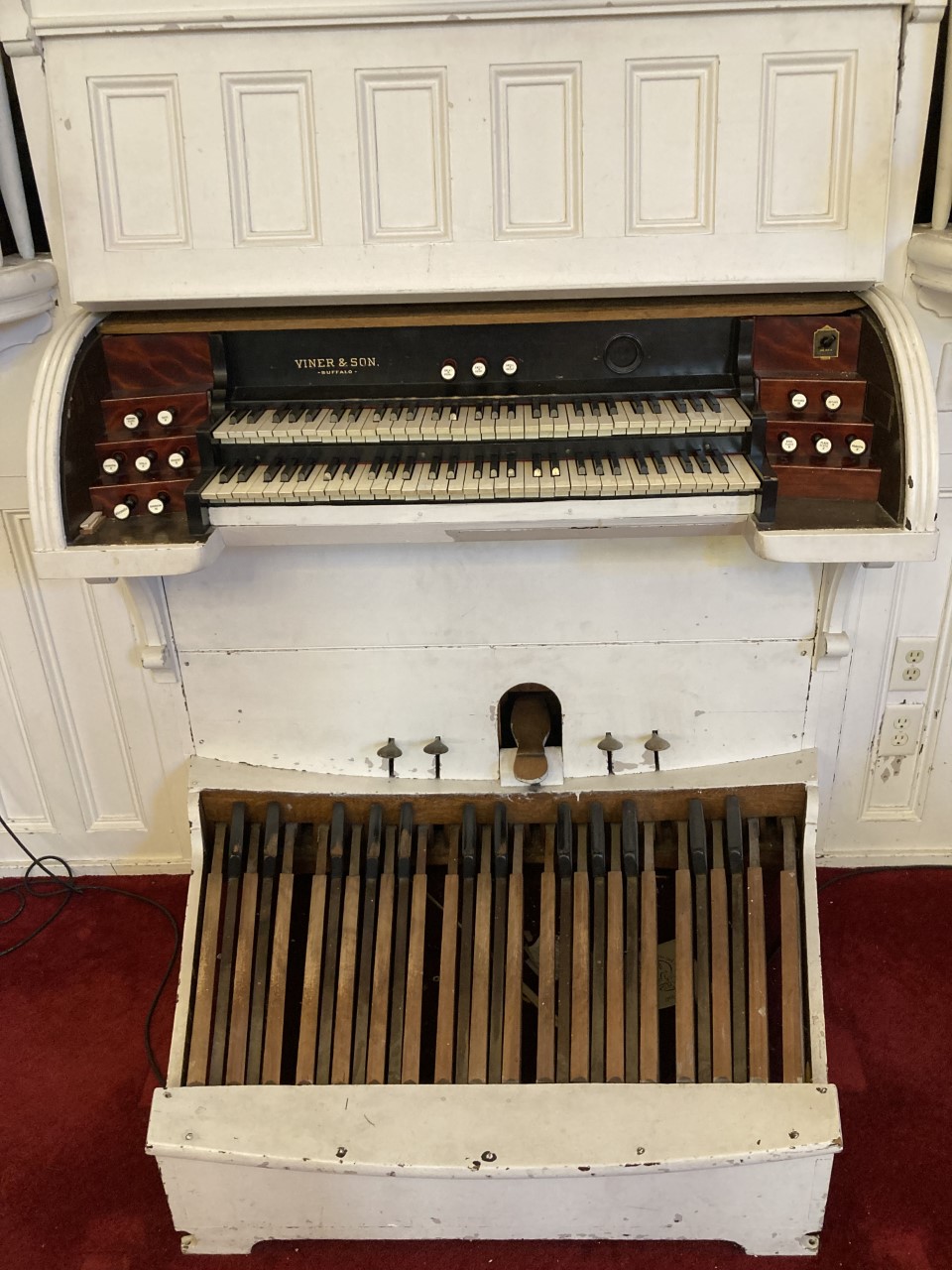 Keydesk and pedalboard: Photograph by Alden Snell. Taken on 2021-07-11 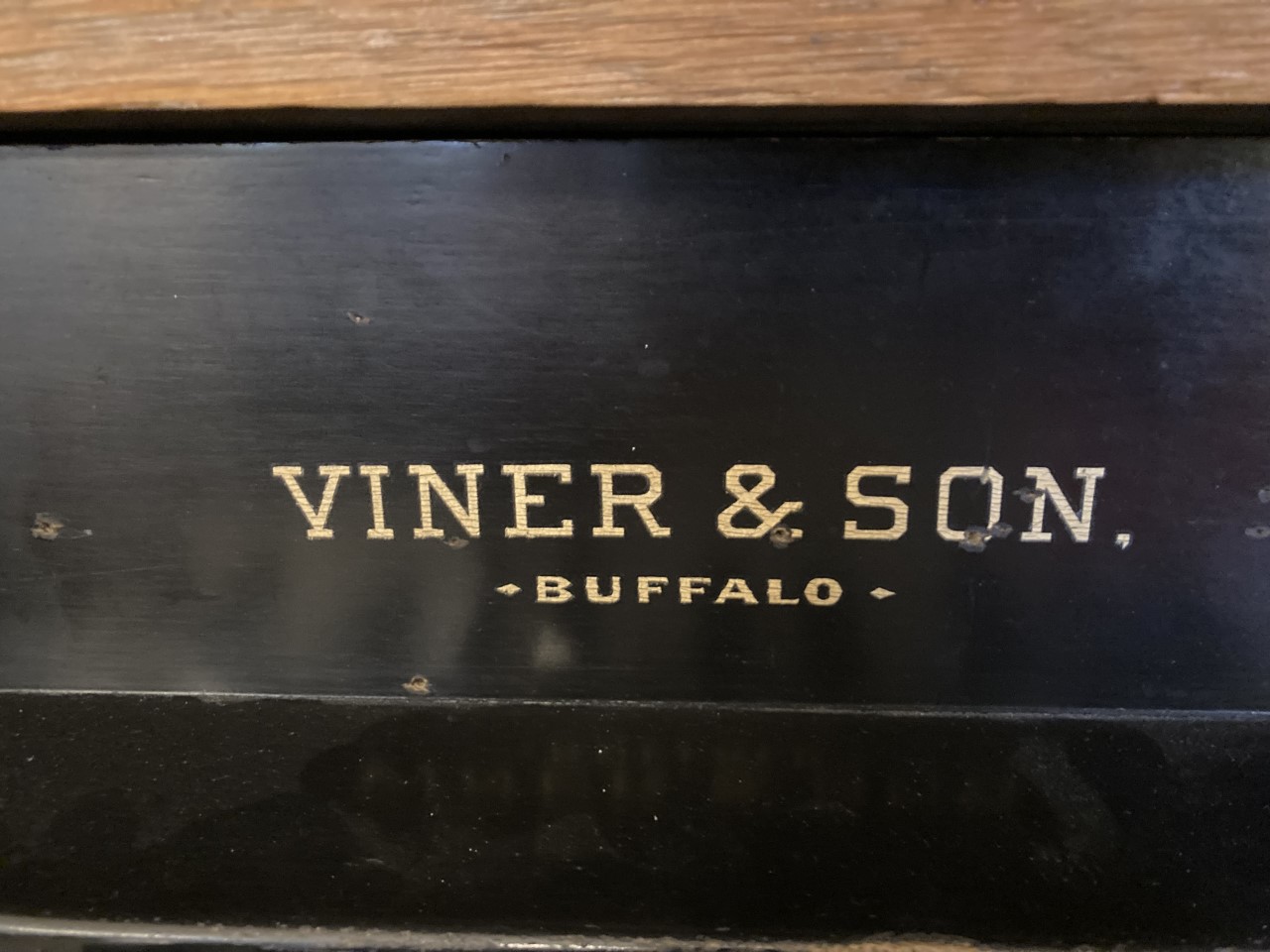 This instrument has been viewed 537 times.