We received the most recent update for this instrument's status from Database Manager on September 08, 2019.

All: We received the most recent update for this division from Database Manager on September 08, 2019.

Main: We received the most recent update for this console from Database Manager on September 08, 2019.

According to a Sept. 4, 2019 entry by Richard Swanson on Facebooks Pipe Organ Builder's Group, "In September of 2014, Messiah Lutheran Church, Midland, MI decided to gift their 1975 Berghaus tracker organ to King of Kings Lutheran Church, Frankenmuth, MI. The organ was removed by R.T. Swanson, Inc. and transported to storage places in Frankenmuth. The architecture of the new sanctuary at King of Kings made it impossible to accomodate the Berghaus as configured. Case height was the main impediment. R. T. Swanson incorporated 2 pipe ranks, static reservoir and blower from the Berghaus into a new 9 rank electric action pipe organ for King of Kings. The remains of the Berghaus remained in storage in Frankenmuth until 2018 when King of Kings gifted the Berghaus to Wigton Pipe Organs of Dryden, MI for use as the basis of an organ proposal for St. Augustine's House, Oxford, MI."

We received the most recent update for this note from Database Manager on September 08, 2019. 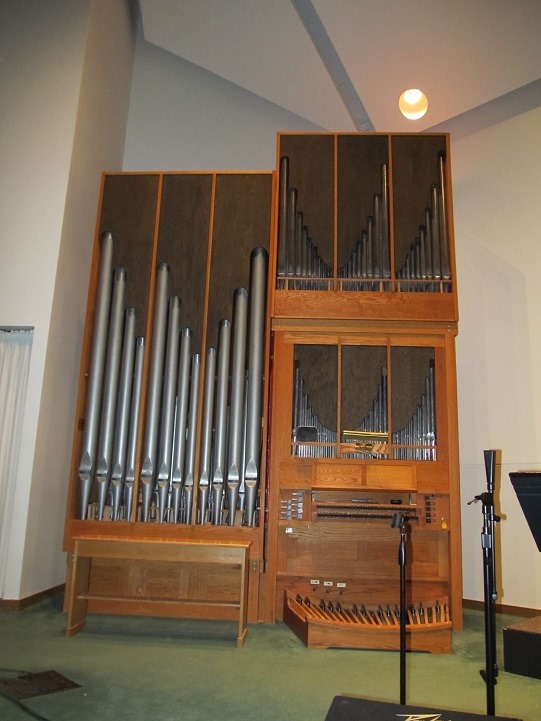 Organ in front of sanctuary, 2014: Photograph by Richard Swanson.

This instrument has been viewed 115 times.